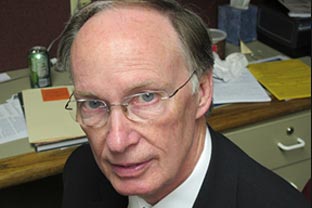 In his first 21 months in office, Alabama Governor Robert Bentley spent $621,712 on travel in state-owned airplanes. While critics say that's too much, Governor's office says trips is always Alabama business.

Some of the more costly trips included two March 2011 flights. One was for $1,885 to Mobile to meet with a newspaper editorial board and Baldwin County officials. Another was a $1,713 trip to Bayou la Batre for a news conference involving BP.

Governor Bentley's office said the flights are a reasonable and necessary expense.

"The governor has to fly to be everywhere he needs to be on many different days. It is not uncommon for the governor to have a day where he has meetings scheduled in his office, and then meetings taking place in Huntsville or Dothan and Mobile. In order to be everywhere he needs to be as the governor, it is essential that he has transportation to get him there," said Jeremy King, Governor's communications director.

Mr. King said that Bentley's use of state-owned planes isn't much different from that of his predecessor, Gov. Bob Riley.

In the first 21 months of Mr. Riley's second term, the transportation department billed his office $527,280. Governor Bentley's office also was charged $21,902 for flights on Department of Public Safety aircraft and approximately $1,200 for two Department of Environmental Management flights during his first 21 months.

Mr. King said that the higher amount can be attributed, at least in part, to the April 2011 tornadoes that swept through Alabama and the touring of the state that Bentley did afterward. Similarly, Mr. Riley's office had a spike in travel after the April 2010 oil spill in the Gulf of Mexico.

Governor Bentley's officials also pointed out that he does not take a salary as governor and voluntarily discloses his tax returns.

"He is not profiting from this office. We don't think the is exorbitant. We think it is an effective way to govern," said press secretary Jennifer Ardis. ■