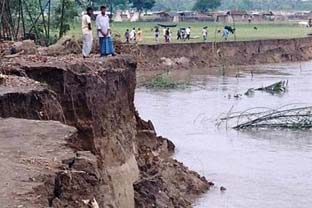 
The erosion is destroying livelihoods and costing the economy an estimated $250 million a year.

The Manila-based lender said that an ADB multitranche loan financing facility of 255 million U.S. dollars will help put in place riverbank protection structures and embankments along vulnerable portions of the Jamuna, Padma, and Ganges rivers, the country's main waterways.

According to the ADB, the facility will also strengthen management of flood and erosion risks, and teach local communities to operate and maintain flood and riverbank protection infrastructure, said the bank.

The first tranche loan of $65 million will target badly needed structural and improvements in three high-priority areas, it said and added ADB will provide the remainder of the $255 million in subsequent loan tranches.

On top of ADB's funds, according to the statement, the government of the Netherlands will provide co-financing of $15.3 million, with the Bangladeshi government supplying counterpart funds of $103.4 million for the investment program.

ADB also this week approved two separate loans to Bangladesh to modernize the country's large irrigation systems and to protect coastal towns from the ravages of natural disasters and climate change. ■