Staff writer ▼ | February 3, 2014
Billions of dollars will be spent on infrastructure development in Abu Dhabi over the coming years according to a report by the Abu Dhabi Council for Economic Development. 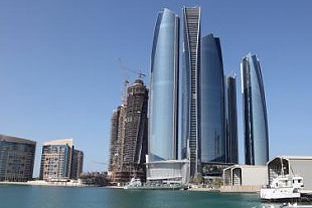 Billions of dollars will be spent on infrastructure development in Abu Dhabi over the coming years according to a report by the Abu Dhabi Council for Economic Development.


The Council indicates that $100bn will be spent on housing, schools, transport and other projects that will transform the emirate and yield major benefits for the travel and tourism sectors. The railways are to be a major beneficiary of investment financing with AED11bn ($2.9bn) earmarked for developing a 131km metro system in Abu Dhabi that will accelerate the flow of traffic and keep pace with the growing population.

Moreover, AED40bn ($10.9) will be spent on the Etihad Rail scheme that will link Dubai, Abu Dhabi and the northern emirates, and the ports of Khalifa and Jebel Ali Motorists will also get a slice of the action, with 246km of new major roads, including a 62km highway connecting Dubai and Abu Dhabi, scheduled for completion in 2017.

The all important aviation industry also stands to gain, as the report indicates the expansion of Abu Dhabi International Airport, with the building of the new Midfield Terminal in 2017. Funds have also been reserved for development of the Sheikh Zayed National Museum and Louvre Abu Dhabi. ■

Mood Media announces changes to board of directors

Heads of eastern German regions speak in favor of Nord Stream 2
Tanzania, Burundi plan to construct joint nickel processing plant
The Economist: Democrats have 68% chance to get Senate, 99% chance to get House
Taiwan to invest NT$50 billion in 5G