Sydney, a loud place where bodies are shinier and chefs more adventurous

Wilson Jone ▼ | December 2, 2017
Sydney is one of the most incredible cities in Australia. It is listed as one of the world's best gay-friendly cities, it is a melting pot where everyone is welcome from every corner of the world. 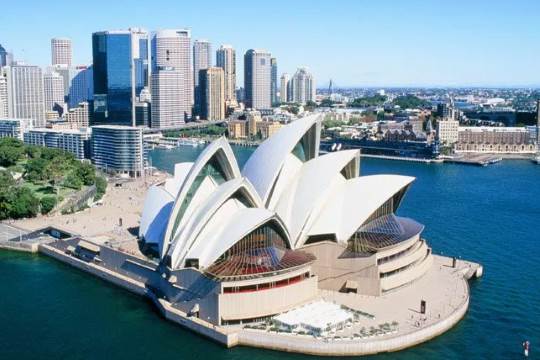 That melting point reflects excellently in languages spoken: English, Arabic and Chinese. At the same time, melting wasn't good for indigenous Australians: they make around one percent of Sydney's population. But that diversity made it become famous to the culinary world for its fusion food and - barbecue - as a way of life in Australia. Virtually every Australian, or a Sydneysider for that matter, has its favorite BBQ food which he packs in the boot of his car along with picnic goodies and heads out with a family on a gorgeous day.

A huge choice of fabulous cafes, pubs and droolingly gorgeous restaurants locations some of which have BYO – bring your own - is another cultural shift towards drinking and dining at a friendly place, incorporated into their eating habits. Sydney has the sunshine and the glamour, Sydney has the most popular structures in the city, and very recognizable by most tourists the Sydney Opera House and many other structures worth a closer look, each of which brings numerous experiences, different as you visit different parts of the town.

The Sydney Harbor Bridge, connecting the Sydney central business district and the North Shore high above the Sydney Harbor, is definitively a place to see. It offers you a number of chances to climb to the top and overlook the amazing city and the opera house below it. The Central Railway Station, the largest railway station in Australia, is a historic piece of Australian culture that you simply cant' miss with the main terminal still in use. An abandoned station master’s office, with bathrooms and a fireplace from a past era tells its story.

Another place full of history is Kamay Botany Bay National Park where you can see a small plaque that marks Captain Cook's landing place. Then head to a nearby beachside suburb Cronulla, soak up some sun and have fun. Every beach has its own small town, great shops and eateries and gay visitors often are seen in large numbers at Bondi Beach. Thirsty? Hungry? Both? Great! Take some meat and beer and go to the spectacular Royal National Park with plenty of opportunities for barbecues, fishing and bushwalking to gain strength for you next big adventure.

Standing above the Sydney central business district The Sydney Tower is one of the safest buildings of this magnitude ever constructed by man that can stand hurricanes and earthquakes. Enjoy the breathtaking 360 degree views of the beautiful harbour city from its observation deck. After that, it's time for the best garden and zoo around. From the giraffe enclosure one can see the Opera House and admire the giant Harbor Bridge. A short walk from the Royal Botanic Garden takes you to Hyde Park and its Archibald Fountain, another striking attraction and a serene spot.

The Queen Victoria Building occupies an entire block on Sydney's George Street and it is home of more than 180 of Sydney's finest fashion boutiques, jewellery shops and homewares, surrounded by great cafes and restaurants. The building from the 1890s was build as a Municipal Market on the scale of a Cathedral. The building contains a life-sized figure of Queen Victoria in a replica of her Coronation regalia, surrounded by replicas of the British Crown Jewels. The figure rotated slowly throughout the day.

But most probably the best shopping place in the city is Paddy’s Market, a historical marketplace and a natural place for every shopaholic situated at a Market City complex. And there is the Sydney Fish Market, the largest market of its kind in the Southern Hemisphere and the world's 3rd largest fish market. Sydney’s Chinatown is the place with cheap but great food, especially in Sussex street. Don't miss Chinese Garden of Friendship. It is filled with bamboo plants and waterfalls and is a popular venue for weddings.

After that Art Gallery of New South Wales is the best in Sydney and most probably in Australia. It hosts works of Australian, European and Asian artists. Australian Museum, College Street is focused on natural history and anthropology and it has something to show because some of the earliest humans on Earth are from Australia. And there is The Rocks: the oldest area in Sydney with its old soul, themed and historic pubs and lively Rocks Market on each weekend. If you don't see anything else in the city, just The Rocks with Discovery Museum will make your day. That and a delicious barbecue. ■

Bangkok to host 4th Asian Organic Gourmet Festival
Salon du Chocolat, the most delicious festival in Paris
Sabah - the land beneath the wind

Lufthansa offers to sacrifice routes to save Air Berlin deal