Postcard from Brum, the heart of England

Nalynn Dolan Caine ▼ | July 5, 2014
This British city has no royal history, numerous palaces, fortresses and attractions like London Eye. But, if something wasn't developed, produced or innovated there, most probably wasn't innovated anywhere else in the world. Say hello to Birmingham, known as "the first manufacturing town in the world". 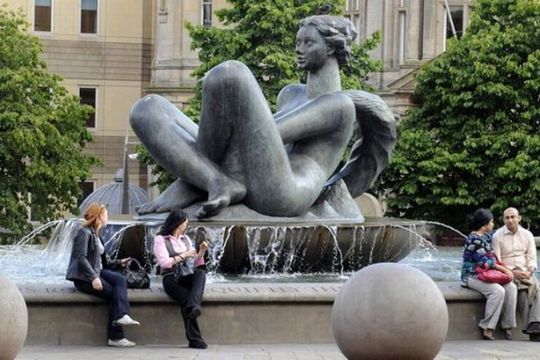 This British city has no royal history, numerous palaces, fortresses and attractions like London Eye. But, if something wasn't developed, produced or innovated there, most probably wasn't innovated anywhere else in the world. Say hello to Birmingham, known as "the first manufacturing town in the world".

You may know or don't know, but some of the brightest minds of the 18th century, a group of great thinkers and inventors who believed that what they were doing would better the lot of mankind, established the famous Lunar Society in Birmingham. Their workshops produced a series of innovations such as a steering system that was used by Henry Ford, steam engine technology, a mechanical copying machine, fizzy drinks...

Between 1760 and 1850, Birmingham residents registered over three times as many patents as those of any other British town or city, putting once a medium-sized market town at the forefront of worldwide advances in science, technology and economic development. If by any chance you are not impressed by what you have read until now - and you should be because we mentioned steam engine technology and fizzy drinks in one sentence - then here it is about Brum from few more angles.

Although much of its history has been lost as the result of World War II bombing, it still has many fascinating buildings to see - the architecture around Victoria Square is probably some of the oldest and nicest in the city. It has more trees than Paris, more miles of canals than Venice, more gorgeous parks than any other European city, more Michelin-rated restaurants than any other English city outside London, and - pay attention now you will like this - it has more than 500 jewellery shops, plenty of great café bars and museums, and perfect shopping.

The focal point of Birmingham life is Victoria Square and its central fountain Floozy in the Jacuzzi, formally known as The River. It is a great place to relax with a snack and watch the locals go about their business. During the summer, the square hosts art and music events. Winter turns grandiose Victorian Council House and Town Hall look like winter wonderland, and when Frankfurt Christmas Market rolls, it turns the square into the happiest place on earth for people of all ages.

Birmingham has an extensive canal system, many of them haven't been touched since their old industrial days. Walk toward Gas Street Basin, a meeting point for canal people, and take a longboat journey, or stroll along the towpath, have lunch here at any of great restaurants and coffee stops overlooking the canal. Don't miss to visit The Black Country Living Museum. The Museum also has a working boat dock on site and eight canal boats, including President, the only original steam powered narrow boat on the waterways still powering away after 200 years.

Hit Spiceal Street in the heart of the city that lies in the shadow of the stunning St Martin’s Cathedral that complements the beautiful architecture surrounding the square. Spiceal Street is a new restaurant quarter at Bullring Shopping Centre, one of the largest shopping centres in the UK with more than 160 brands and retailers and more than 40 restaurants and cafes to relax in. For more shopping there are the cosmopolitan Martineau Place and The Pallasades, The Mailbox, packed with designer labels, and Pavilions, for a bargain or two.

What ladies will surely don't want to miss is the Jewellery Quarter. Gentlemen would be pleased to know that some of the world's most famous trophies were made here, among them the torch for the 1948 Olympic Games in London, trophies for Wimbledon tennis champions, the Premier League's winners medals, champion belts for boxing champions and - the whistles for the Titanic. The Quarter hosts Museum of the Jewellery Quarter, and is home to Europe's largest school of jewellery. All in all, a really really nice place to visit. Really.

For more adrenaline, fun, joy, thrill and excitement, try not to miss chocolate heaven Catbury World, National Sea Life Centre, Botanical Gardens & Glasshouses and Walsall Arboretum. Have forest adventures at Cannock Chase and Wyre Forest and visit nearby town Solihull that hosts the National Motorcycle Museum recognized as the finest and largest motorcycle museum in the word. Before you go back home, hang out with locals on the summer beach in Chamberlain Square. Yes, a beach in the square in the centre of the city. Fantastic idea!

Be sure to take a lot of happy pictures to show your family and friends and have a lot of fun in Birmingham. Beach in the square in the centre of the city... Brits, you have to love them. ■