Pocket of Russia, the amazing city of Nizhny Novgorod

Wilson Jone ▼ | February 4, 2017
Situated deeply in the Soviet territory, Nizhny Novgorod is the main center of Russian river tourism, one of the cities included on the UNESCO World Heritage list, the famous Russian center of IT industry, and soon host of the 2018 World Football Championship. 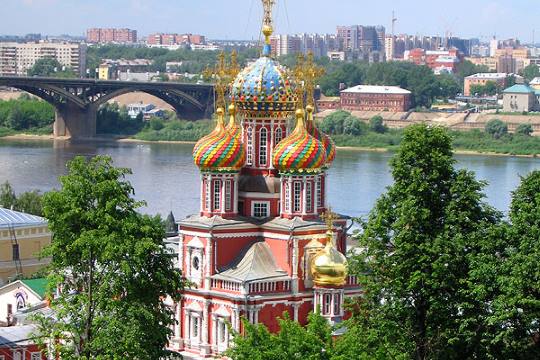 Russia   In the heartland of Russia

Situated on the right bank of the Volga River, Nizhny Novgorod was founded in 1221 by Grand Duke Georgy Vsevolodovich, a duke that fought the fight against Mongols when they first approached Russia in 1223. During Soviet era the city was closed for foreign visitors since it hosted multiple defense plants - there the first Russian atomic bomb was designed, MIG fighter jets as well as submarines. The city is almost in its entirety populated by Russian population but thanks to its engineering industry and scientific orientation around 100 different nationalities live there.

An old Russian saying goes: "Moscow is Russia's heart, St. Petersburg - head, and Nizhny Novgorod - its pocket." The Russia's largest automobile plant, aircraft manufacturing, ship building manufacturing units... they all are still situated there, but the cosmopolitan spirit prevailed and today Nizhny Novgorod is home of more than 100 big international companies and an IT oriented technology park - that enjoys a favorable tax and customs policy - but also numerous gorgeous buildings on all sides. The money flew into the city for the World Cup and made it shine even more.

Nizhny, how the local often are calling it, is the fifth biggest city in Russia. The city in the Volga region is divided by the river Oka into the Upper city and the Lower city. As usual, the Upper city is the old part on the hills, and the Lower city is the new part with all modern amenities a city should have. That former seat of medieval princes enjoys hot, somewhat humid summers and long, cold winters, and you'll enjoy its open summer terraces that serve great food, from familiar western foods to traditional Russian dishes and homemade desserts.

But the main attraction of the city is without any doubt Kremlin. European cities have castles, a Russian city must have kremlin, an old citadel, a defense in the ancient times. The Kremlin complex with 13 named towers is the symbol of the city which now houses administrative buildings, museums, and an old church. This is also the highest point in the city with the great view far and wide and beyond. The walks on the Kremlin's wall are carried out from May 1 to October 1. Don't miss to see the Central Bank because it resembles more of a fairy-tale castle than of a bank.

Nizhny is easy to be walked around but one ride you must take part in: the cable car. The trip offers spectacular views during its two miles long way from Nizhny to the town of Bor across the Volga River. Then go fast to yarmarka, the place to be! This is a combination of a city fair and and exhibition center with numerous events for any taste. What's more, here you could have met Vladimir Putin, members of the British royal family and other noble persons for the 20 year anniversary of the fair’s refounding in 2011.

All in all, there are more than 600 historic and architectural monuments in Nizhny Novgorod. The city - even the kremlin - saw an "upgrade" of glass and steel, but that didn't go too far and the old atmosphere is still there. One of such cultural place you have to visit is Bolshaya Pokrovskaya pedestrian street with most probably the best old architecture in the city with spotlights placed on the ground, pointing upward to highlight it, especially charming on a winter nights. This is also the best area for shopping with small shops and cafes and every one of them is worth your attention.

Near the kremlin and Volga there is Narodnogo Edinstva Square with Minin and Pozharsky monument. Yes, the copy of the original from the Red Square in Moscow. There are only a few churches in town, the Church of Nativity being the most beautiful and Cathedral of Archangel Michael the oldest one. Parks and forests cover one-fifth of the city and there you'll find the botanical garden and even two zoo parks, and from early May to the end of September you can enjoy river cruises down the Volga. Then stretch your legs and use 1,500 Chkalov's stairs that connect the river embankment with the city to see what else it has to offer.

The Chkalov Staircase, named after Valery Chkalov who became the first man to fly from Moscow to Vancouver through the North Pole, is a favorite meeting place for locals. Visit the Rukavishnikov Estate Museum that shows the real life in old times when tzar was around, without any embellishment, and don't miss to take your kids to kids museums to fall in love with science. If not sooner then pay a visit to Nizhny in 2018 when it will be one of the Volga cities to host the World Football Championship. ■

Largest street painting festival in United States is back better than ever
Seven magnificent Bugattis came full circle from 1932 to auction in Paris
Prairie Lights, four million lights in Grand Prairie
Wanna see some good movies in ice theater? Inari in Finland is your destination!