Terrence T. White ▼ | June 2, 2018
With its eyes on peaceful French coastal towns and roots deep in the African ground, Oran in Algeria managed to put togeter Arabic culture, harsh reality of living on the edge of a desert, restless sea, and French architecture from 1940's. 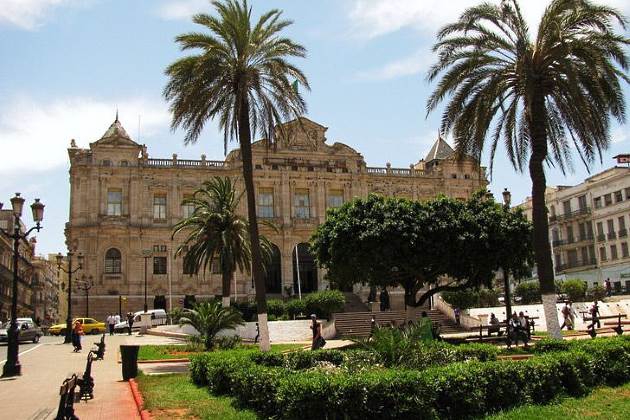 Just a mention of northern Africa is enough to evoke pictures of vast lands, cruel deserts, nomads and small sandy villages that found their fortune on the coast of the Mediterranean Sea. As vivid as it may be, the picture is almost certainly wrong because, as Oran in Algeria shows it, there's much more to it than well-established stereotypes. Can you imagine France's Nice from 1940's inhabited with Arabs, having all modern amenities, excellent nightlife, some of Africa’s best beaches and a salt lake? No? Welcome to Oran, o ye, of little faith!

The best way to know the town is its historical center, of course, but there are some part you can't miss such as port and its promenade buzzing with charming cafes and restaurants. Being a port of calls for private yachts, cruise ships and ferries from Spain and France, it is a great place to enjoy a cup of coffee while watching lives and destinies getting out and coming in, bringing all kinds of influences to the gate of Africa. Not to mention sea sights and sounds coupled by salty aroma that make any day better and bright.

Heading deeper into the town, the road takes you among impressive French-style buildings coming straight from 1940s France. Where there's France, there must be a cathedral and indeed there is: Cathédrale du Sacré-Coeur d'Oran was the first French cathedral in the country. OK, today it hosts a library but its architecture is still stunning. The main square is Place du 1er Novembre, surrounded by buildings and with a lovely fountain on it. French is not an official language these days, but it's so deeply rooted into the country's history even the government uses it.

A long boulevard of Oran is the main street for a reason: it is filled with all kinds of "C'mon, buy something!" places while at the same time is boasts fantastic views of the coast together with a sight on surrounding cliffs. Remember, some shops offer a complimentary cup of tea and it would be considered rude not to accept. The next natural step is to pay a visit to the first ever district in Oran, the Sidi el Houari, with three quarters and their own charm full of the historic buildings and if you want to know Oran's past it is a must.

Following sparrows's flight, either House or Spanish or any hybrid that may happen between them, your eyes will inevitably end some 400 metres above sea level on Fort Santa Cruz. Strategically overlooking the city, the Mers El Kébir port and the Medeterranian Sea, the magnificent castle with bright white dome is a reminder of the 17th century when the Ottomans and Spaniards were building it. Admittedly, the castle and chapel, along with a big statue of the Virgin Mary - said to be a replica of the one at Notre Dame de la Garde in Marseilles - are to be seen but Fort Santa Cruz is first and foremost a great escape outside of the busy city.

Talking about religion, Algeria had its upside-down periods like any other place on earth where religion plays a big role. The Abdullah Ibn Salam Mosque, near the marine but far enough to be enjoyed in peace, used to be the Great Synagogue of Oran and one of North Africa's largest synagogues. But it became the mosque in the 1960s, named after a 7th-century Jew that converted to Islam. Anyway, Islam or not Islam, the day in Oran is for the sandy beaches and the night is for fun and joy. We are not exaggerating when we say it is the centre of Algeria's nightlife.

Along the seafront there is La Corniche, Oran's main partying strip. It is filled with nightclubs and bars and place for any type of clientele you can imagine. If you want something posh to show yourself we have good news for you: the luxury hotels are your destination. You don't have to be a hotel guest to enjoy all their amenities and may pretend that you just stepped down from your large suite to enjoy some nightlife while in fact you have the last 20 dollars in your pocket. L'Atmosphère at the Sheraton Hotel saw famous DJs but SunHouse and Le Murdjadjo are definitively places to visit too.

And now the eternal question after a long night: What now? Following the old saying "Whiskey is the best for hangover," the answer is simple: The Medina Jdida. This is the market neighbourhood, the place to buy anything you can possibly imagine except, maybe, a private jet. After a long night with loud music, sounds of bargaining and loud sellers will definitively wake you up. Take care about your wallet here because you are in real danger to spend all you have got on spectacular local food. Don't be surprised if you leave this neighbourhood with just enough money to watch birds. For free. ■

About half of Americans say U.S. moral values are poor

Lions and tigers in Texas! You bet Tiger Creek Wildlife Refuge has them all!
Wurstfest in Texas, the spirit of Germany
Last chance to get your tickets for London’s New Year’s Eve fireworks
Wonderland Festival: See the show or be the show!