Nalynn Dolan Caine ▼ | October 5, 2013
Tell me something about Norway. "Stunning landscapes!" Aha. "Trolls dolls are its most famous souvenir!" Aha. "They invented the cheese slicer!" Oh, okay. "Their football team has never lost against Brazil!" No kidding?! "Pizza is their favourite food and they even wrote a song about it!" Say again! "Pizza..." Stop! What's up Oslo? 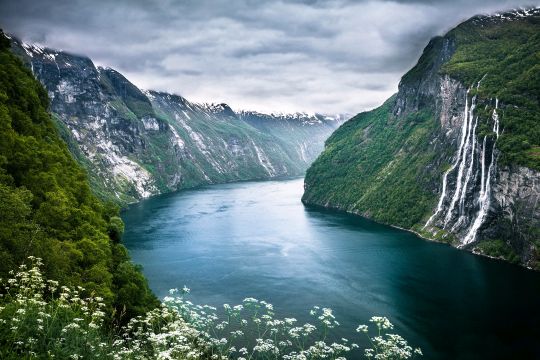 Tell me something about Norway. "Stunning landscapes!" Aha. "Trolls dolls are its most famous souvenir!" Aha. "They invented the cheese slicer!" Oh, okay. "Their football team has never lost against Brazil!" No kidding?! "Pizza is their favourite food and they even wrote a song about it!" Say again! "Pizza..." Stop! What's up Oslo?

Norway, officially the Kingdom of Norway, has it all: a rich history, the king, stunning and dramatic landscapes, obviously one of the national best football trainer - that's life important if you live in Europe - and it has... What else it has? "Norwegians read more than any other population in the world!" Well, that's really something. It can't beat football, but it's really nice to hear that there's a nation that actually reads books.

Oslo, the capital, is a home of "The Scream", undoubtedly Edvard Munch's most famous motif. Walk all the way up to the Ekeberg hill to the viewpoint from which Munch painted famous "The Scream". Make a stop at the funkis-style Ekeberg restaurant, enjoy free panoramic view binoculars of the Oslofjord and town centre, and on your way down visit the Munch Museum which is located in the eastern section of the city.

After that take a boat tour and rest your eyes on the city, the Oslofjord, its islands, Oslo Opera House and Akershus fortress, a medieval castle which was used to protect the city from the sea. Akershus is still a military area and mostly used for official events and dinners, but is open to the public daily. An interesting thing is that a portion of the fortress can be seen at Norway pavilion in Epcot Center theme park in Orlando, Florida.

Continue sightseeing in an old-fashioned style on foot on your own. Oslo is compact and made for walking. You can walk from the Central Station all the way to the Royal Palace in a straight line. Karl Johans gate, Oslo’s Champs-Élysées, connect these two points. Here you will also find Eidsvoll Square and park which serves as a skating rink in winter. The street is bustling with restaurants and stores, an excellent spot to make a break for a lunch and go shopping. Possible damage? The one of epic proportions! The city is not exactly known for bargains.

Talking about the food, people have an illusion of Norwegians only eating fish. Half jokingly they say, frozen pizza is our national dish. The most popular brand is Grandiosa. A mobile ring tone "Respekt for Grandiosa" was downloaded 300,000 times within 1.5 months! ♫ Try to say "No, thanks" to Grandiosa! ♫ Typical Norwegian loves hot dogs, ice cream, potatoes, milk chocolate, cheese, and he eats a lot of bread.

Now when your stomach is full visit Oslo harbour. Here you will find The Nobel Peace Center, the Town Hall and the Aker Brygge pedestrian walkway, a great place to stroll and enjoy picturesque sitting. Every March Oslo hosts the world's best ski jumpers. Visit the platform at the top of the Holmenkollen ski jump tower and enjoy a phenomenal view of Oslo and the Oslofjord. Of course, more than 3,000 km of ski tracks are waiting for you. Put a cap on the head and - yeeee!

Don't miss to visit the Ski Museum, the world's oldest ski museum, founded in 1923, and see skis from the Viking Age and polar equipment used in the expeditions of Fridtjof Nansen and Roald Amundsen. Cool!

If you prefer art over sport, the Frogner Park, the biggest park in Norway, is a place for you. A large collection of works of Gustav Vigeland, a Norwegian sculptor, is telling a story about the cycle of human life from birth through old age using full-size models. Or, visit the Krogskogen, a "fairy tale forest" just outside Oslo which is the setting for many fairy tales about kings, forest trolls and such. For even more stories there is the Oslo Book Festival and Norli bookstore is definitively a place to spend a few hours during September.

Before you go home find time to visit the Viking Ship Museum, which among others, hosts the world's two best wooden Viking ships from the 9th century, and the Kon-Tiki Museum. But if you want to experience something that you will remember the whole life, then you should visit Oslo during the autumnal equinox to see "River walk by torchlight", an event when all electric light are turned off to be replaced by thousand of torches and candles. Now try to say "No, thanks" to grandioso Oslo. Impossible, isn't it? ■

The climax is in the eye of beholder