Coimbra, the melancholic soul of Portugal

Nalynn Dolan Caine ▼ | November 7, 2015
Nestled on the banks of the River Mondego, Coimbra is Portugal's most romantic city. It is a city of Roman age ruins and churches, a destination that has inspired many poets and writers, and one of the most popular holiday cities in Portugal. 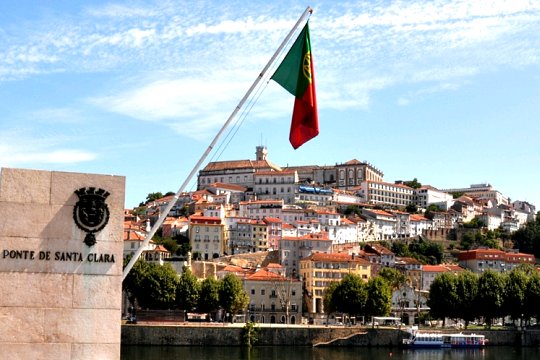 Coimbra is a small city but full of galleries, antiques, charming cafes and appetizing choices. It feels warm and homey with laundry hanging from drying lines above the streets, and all those noises of everyday life spreading throughout its winding cobblestone streets. It is at its best when the university, the oldest in Portugal, is in session, especially in May when students celebrate the end of the academic year. Their joyful and colourful show is attracting thousands of spectators to the city every year.

As soon as in the Middle Ages, Coimbra was divided into the upper city, Alta, where the aristocracy and the clergy lived. The lower city, Baixa, was where the merchants, labour and artisans lived. Today the city still feels like being stuck in another century. But don't let its wonderful mix of centuries of cultures fools you. This mini-Lisbon has some of the best Michelin-starred restaurants in Portugal, elegant shopping streets, bars open until 2am and clubs remain open until 6am thanks to its student population.

Famed for its hill-nested World Heritage listed University and an outstanding collection of beautiful churches, Coimbra was the first capital of the old kingdom of Portugal. Take the funicular to the top of the hill that overlooks the city and the river. Here, at the city’s highest point, you will find the prestigious University of Coimbra - where you can stop in at the cafeteria for lunch. There you will also find the 18th Century Joanina Library which houses over 250,000 books from the 12th to the 18th century.

There is also Jardim Botanico considered as one of the most beautiful botanical gardens of Europe. The upper terrace houses the botanical collection, while the lower level is dominated by a large central lake richly ornamented with sculptures of water-related animals. Next to Republic Square and the University, there is romantic Penedo da Saudade, a public garden, that offers views of Coimbra skyline. Sharing this hilltop location is the 16th Century New Cathedral and the Machado de Castro art museum. The university Science Museum is also housed nearby.

Enjoy wandering small narrow steep streets of the upper town, its courtyards, grand doorways, and archways. Then make a stop and take a sit in one of the bars that are scattered across old and new parts of town and enjoy fado. In Coimbra, fado singers - typically students - perform in streets, squares or in clubs. And while in Lisbon the fado singers sing about hardships, Coimbra Fado singers sing serenades. Arco da Almedina, the main gate to the historic center of Coimbra, is one of the city's best places to hear fado.

Away from the university, about halfway down the hill into the downtown, there is Se Velha, the old cathedral and one of the most important Romanesque buildings in Portugal. And here you are, in the downtown, a commercial part of the city. Here you will find the historic Santa Cruz Monastery with the tombs of Portugal’s first two kings but also designer stores, cafes and restaurants where you can enjoy regional dishes. The city and the surrounding region is one of the most gastronomically diverse in Portugal.

When touring the city, don't miss its colourful market squares, check out its bookstores and galleries and handsome churches... Have a cup of coffee in an outdoor cafe on Praca do Comercio, a square filled with shops that becomes particularly lively and attractive during the evenings and on weekends. Enjoy its narrow streets and medieval aches and visit Portugal dos Pequenitos, an exhibition park, a miniature world, full of scaled-down models of some of the most famous national and international monuments and buildings.

After days of wandering around the city, transport yourself to nature and visit Parque Verde do Mondego, or Green Park of the Mondego River, situated right at the edge of the city. Choupal National Forest is another city's major leisure area where you can go to rest your head of history and enjoy birds singing in the nature. Before you go home, it feels right to enjoy your last romantic Coimbra gourmet dining listening to Fado serenades that fill the air with the sound of guitars playing melodious tunes. Amazing music. An amazing city. ■

Imagination is everything
NOLA, let the good times roll
I met its soul

Thanksgiving will be busiest for airlines since great recession

Merzbacher, a lake in Kyrgyzstan that mysteriously empties itself
Hampton Inn Clewiston hotel opens in Florida
Turkish Restaurant Week, Turkish delights awaits you in Washington DC Metro Area
Annandale Falls, one of the most visited tourist attractions in Grenada