Nalynn Dolan Caine ▼ | September 22, 2012
A possible situation: You are walking along the road and a car stops with the driver holding a map to ask you to show him the shortest road - to your heart. Oh, yeah, that's Italy, a country of beautiful women, the most charming men and places that call you to enjoy its charm - restaurants. 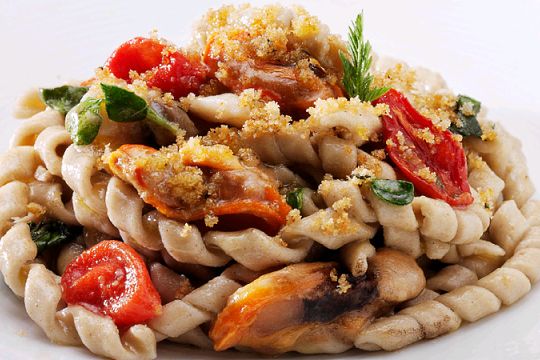 A possible situation: You are walking along the road and a car stops with the driver holding a map to ask you to show him the shortest road - to your heart. Oh, yeah, that's Italy, a country of beautiful women, the most charming men and places that call you to enjoy its charm - restaurants.

Not far from the Milan city centre, in Via Montecuccoli Raimondo, live two Italian cooking legends: charming Aimo and Nadia, his childhood friend. Back in 1955, Aimo Moroni took Nadia by the hand and they went to Milan where Nadia showed him the shortest road to - a restaurant. Well, that's our version of the story but at the end of the 70's Il Luogo di Aimo e Nadia was described as the place that created a great food revolution and that's the truth.

With Nadia in the kitchen and Aimo walking around from table to table, everything is working like a charm. Menu? Mama mia! It's an Italian classic from start to finish! Risotto all'olio di olive Nocellara con gamberi di Sanremo, Ravioli di semola e farina di ceci tostati, Animella croccante in semola di grano duro... Their two Michelin stars are carved in stone.

If you are going to the south, you'll encounter Florence, a city that found its place in many love stories, and one of the greatest of them all hides in Via A. del Verrocchio and it's called Cibreo. Cibreo is the place where the staff will sit and talk to you before you order: there's no printed menu. Have no worry, they know all languages needed and are experts for traditional Tuscan food. You are in good hands.

Cibreo's chef is following the rhythm of the seasons, so you can expect different meals every season and slight changes every day. What to taste? You may order "Crostini di fegatini", classic Florentine chicken-liver pâté, "Trippa in insalata" or you can simply say "fish" and let the chef do the rest. Olive oil is Florentine, lemons from Sicily, tangerines from Calabria... There is no room for mistake in choosing the ingredients. And you certainly can't be mistaken if you choose Cibreo for an explosion of colours, textures and taste.

Now, if you go all the way down to the south, in Licata on the Sicily Island, in an old street Corso Filippo Re Capriata, you'll meet Pino Cuttaia, a true culinary master. After school, he tried to work in a factory but discovered that the kitchen is his place of joy. Step by step and Pino became a chef in Michelin-starred restaurants. However, he wanted something more: he returned to Sicily to start his restaurant without using liquid nitrogen, siphons and stuff like he is running a research lab. No, this time he wanted the kitchen based only on local ingredients and a long heritage of Sicilian cuisine.

At his restaurant La Madia they like to say "We definitely hope you are not on the Atkins diet", and indeed we hope that you are not. Seven different kinds of bread every day, Sicilian olive oil, smoked fish, arancini, cannoli... are definitively not for an "I'm-on-diet" person. Pino makes meals the way his ancestors made them and that can be easily seen in "Chopped red shrimp with mayonnaise and tuna roe" or "Raviolo di calamaro ripieno di tenerume, in salsa d’acciughe". Chef Pino makes his own meals, yet with unmistakable flavour of Sicily.

You will agree that the proper end of every good meal is an ice cream. A spectacular ice cream you can find in Garibaldi Street in Viareggio, at the place called Gelaterie Punto G. Nobody knows when the man enjoyed the first ice cream but people at Punto G certainly do know the art of making a unique ice cream that turns ingredients into a divine taste. They milk cows and pasteurize it on their own, they search for the best eggs of the best chicken, and they search for pistachio on another continent.

So, what you got when you put together the almond of Avola, pine nuts of San Rossone, the hazelnuts from the Langhe DOP, chocolate by Amedei and special eggs by Paul Parisi? After five hours of work there's a liquid ice cream and when it's cooled (it takes about five minutes for that), you'll get an ice cream with tastes that explode in your mouth. It's so natural that the people with celiac disease or diabetes can enjoy it to the fullest. ■

How much product information your consumers want?