Aarhus, the happiest city in Denmark

Marla Martin ▼ | June 3, 2017
A European Capital of Culture and a European Region of Gastronomy, Aarhus in Denmark is a total apposite of what one would expect from a city founded by Vikings. Also called The City of Smiles, Aarhus is the perfect mix of small town charm and Copenhagen-big-city style. 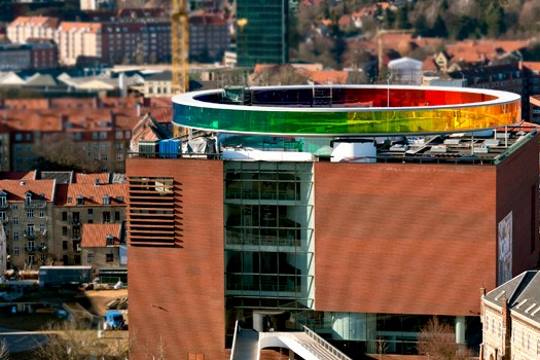 Denmark   On the east coast of the Jutland peninsula

Nobody could have thought that the place founded by the people who know no fear will once be a European Capital of Culture 2017. Aarhus still has its old attractions as is Central Food Market - but it also evolved into a modern city as one of the largest industrial ports that handles more than half of Denmark's container traffic - with beaches, the harbour, charming streets, and a huge number of large parks and small natural oases where you can enjoy nature and rejuvenate your mind, body and soul.

In Aarhus you can eat well and you can party hard. In Kopenhagen's shadow for a long time, Aarhus embraced changes and one of them is a culinary revolution. After Michelin stars came to town in 2015, new restaurants and breweries exploded and the best of them are along the Aarhus River. The best way to start the day is with a coffee and a slice of bread or a pastry. Kanelstang (cinnamon bun) or sourdough bread you simply must try. Good food you can find anywhere but for the best coffee you'll have to go to the Latin Quarter.

The "place at the river's mouth" managed to keep the old spirit and cobbled lanes connecting churches and half-timbered homes of the Latin Quarter dating back to the early 17th century, show its history at its best. Fairy-tale facades along Møllestien laneway, the most beautiful street in Aarhus, and the Old Town, a unique open-air museum, will make you think that travel is possible here and now. Here you can meet people dressed just like in the old days, cooking, chopping wood, sewing... Take horse-drawn carriage to soak up the Old Town spirit.

But Aarhus is not strictly divided on the old and new town and Moesgaard is the best example of the old-new mix. The building is futuristic but its exhibitions are telling the story about country's culture, going all the way back in history with 2000-year-old Grauballe Man. And in Denmark, they always go a step further in design: ARoS Aarhus Kunstmuseum featuring a vivid rooftop walkway Your Rainbow Panorama while 60m tall tower of Aarhus City Hall with 7-meter clock in diameter was included in the Danish Culture Canon. While at culture, its Dokk1 library, the largest in Scandinavia, includes the largest tubular bell in the world which rings each time a baby is born at Aarhus hospital.

The best way to explore Aarhus is on bike or on foot, and we recommend the waterfront for the start, going from the south, to the summer home of the Danish royals Marselisborg Palace with beautiful park, and further to the north to the Risskov district filled with many large mansions. The memorial stone marking the entrance to the area where in October 1951, a meteorite exploded in the atmosphere over Denmark and the piece of it, about the size of a clenched fist, was recovered in the forest.

And for party life Aarhus can thank its young population - 44% of the population is under 30 years old, the youngest in Denmark - that make it all roll. The glass concert hall the Music House is maybe the most popular, but number of other clubs guarantee a night of music and good time. Good times are not confined to "night and inside": the city is famous for festivals throughout the year. In August, the Aarhus Festival is a good excuse to take a few days off from work, and themes of other festivals range from Vikings in late July, to food and jazz events.

The municipality of Aarhus covers approximately 300,000 inhabitants and they did what very few places in the world did: They established the Women’s Museum. That unusual museum is just across Aarhus Cathedral, the Denmark’s longest and tallest church situated on Store Torv, the main square that hosts many notable buildings. At the very same square you'll find Cafe Bar Under Masken with artistic wood sculptures, old maps on the ceiling, and an atmosphere that's a mix of pirates and hippies in their best days.

For the end don't miss shopping, the best in Denmark! Locally, of course. Forget the well-known brands, you have them at home, and visit Danish clothing brand Ganni, Stina Goya with colorful pieces, and Rains with - the name says it - stylish waterproof pieces. The best shops you will find in 850 meters long pedestrian high street Strøget, the main shopping street, also the longest shopping street in Jutland peninsula. Enjoy, forget the worries, be happy, and shop till you drop. Just be careful not to leave your whole salary here. ■