Nalynn Dolan Caine ▼ | June 1, 2013
'Sit on a cloud and visit for a while, it'd do me good just to see them smile, if heaven wasn't so far away, I'd pack up the kids and go for the day' - 'Cause I'm on my way to Tennessee, singing 'Georgia On My Mind', chasing what they say's a dream, thinking maybe it ain't mine'. 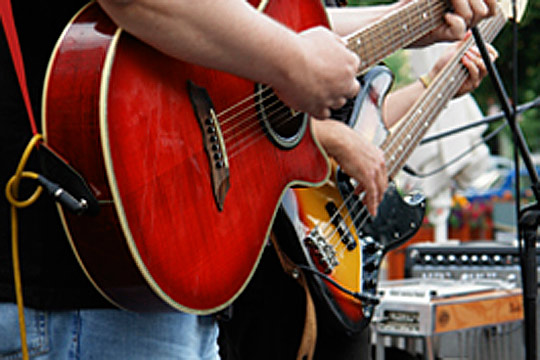 'Sit on a cloud and visit for a while, it'd do me good just to see them smile, if heaven wasn't so far away, I'd pack up the kids and go for the day' - 'Cause I'm on my way to Tennessee, singing 'Georgia On My Mind', chasing what they say's a dream, thinking maybe it ain't mine'.

People from Nashville would tell you that the city is much more than country music, GooGoo candy bar, and honky tonks but music is unlike any other thing on Earth, and Nashville is its most famous starting point and musicians from all genres come to Nashville to record.

If your time is limited and you want to get familiarized with this vibrant city take trolley tour around the city for a full day of sightseeing, or Nash Trash Tours, a guide tour in gaudy pink bus, actually a comedy routine that will make you laughing the whole way through.

There are numerous museums and art centres scattered around the city but right in the middle of it stands a full scale replica of the Parthenon. Built for the Centennial celebration some hundred years ago, it houses an art gallery and a large park surrounding it. An impressive landmark, no doubt about it. Take pictures.

There you will also find a quite huge and imposing golden statue of the goddess Athena. /Ooh, ooh, ooh, she's a little unusual, ooh, ooh, ooh, she's American beautiful/ The park often hosts live music events, a beautiful place to chill out or even to have a picnic and enjoy the day. Take pictures.

Also, take a look at The Tennessee State Capitol, one of the oldest operating capitols in America without a dome, and the AT&T tower, the largest building in Tennessee, affectionately known as the "Batman building" because of the two towers shaped like Batman's ears. /No sir I ain't been drinking, I ain't even had one beer, this sweet thing's got me buzzing, from whispering in my ear/

Treat yourself with Nashville GooGoo delight and take a walk across the pedestrian Shelby Street Bridge, the only concrete trusses identified in Tennessee, and enjoy outstanding views of the river and downtown skyline. If you want to see some wonderful scenery and a peaceful place to get away, then Radnor Lake is for you.

For those adictied to adrenaline there is Nashville Superspeedway, amateur races take place on the weekends when the professionals aren't burning the track.

Music Row is widely considered as the heart of Nashville's entertainment industry. Historical sites include RCA's famed Studio B where hundreds of famous musicians have recorded. Lower Broad, an entertainment district full of honky tonks bars, is a place where many music veterans made their first steps towards stars and glory.

Nashville Crossroads, Rippy's, Layla's Bluegrass Inn and Legend's corner and just some of the places where bands are great, beer too, and the last call comes way too early, mostly around 3am. Bluebird Café, in the southside, is one of the top venues in Nashville to grab a seat. /Fill it up or throw it down, I'm about to tear a new one in this old town, 5 4 3 2 1 I'm a rocket man, all you got to do is put a drink in my hand/

Make a stop at Kocktails & Kouture and have a drink, eat and shop, all in one in style. There is also U-shaped The Catbird Seat restaurant with the best chefs and 3 hour, 9 course food experience. If you prefer dark, laid back but classy fashion hangout style, don't miss Patterson House. Patterson will bring you back into the prohibition era when liquor cost as much as your car but was worth every cent.

/You can wake me up in the dead of the night, wreck my plans, baby that's alright, this is a drop everything kind of thing, swing on by I will pour you a drink, the door's unlocked, I'll leave on the lights, baby you can crash my party anytime/ ■

The 11th Honey and Bee Products Festival opens in Athens
Santa in Texas, sculptures on the beach, smile in the air
Zadun, Ritz-Carlton Reserve resort opens in San Jose Del Cabo, Baja California
Let your kid have unforgettable night sleeping with a dinosaur in Field Museum in Chicago