Jonathan Hood ▼ | March 6, 2018
You may encounter many defeats, but you must not be defeated. In fact, it may be necessary to encounter the defeats, so you can know who you are, what you can rise from, how you can still come out of it. - Maya Angelou 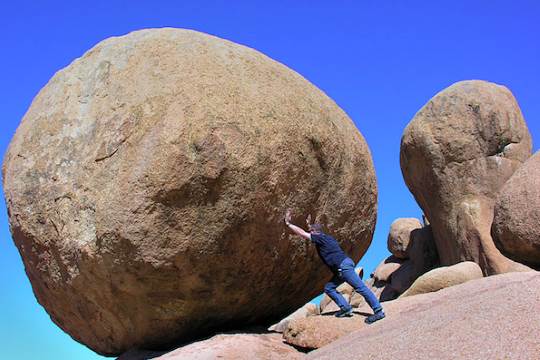 Keep flipping   Patch up your cuts and bruises and continue
I spoke at a Youth Fair in Whitby. The arena was void of AV capabilities so we did it old-school and I simply shared. I brought it back to my first professional speech delivered in 2011.

It seemed to touch the students very deeply, many of which came up to me after to share personal stories of challenge, victory and overcoming. It goes like this.

What would you do if I brought you to a parking lot filled with 100 large rocks, and told you that there is a money order for $1 million under one of the rocks?

The assortment of rocks includes large ones, heavy ones, and sharp ones. It is a hot, sunny, clear day around 10:00 am (the hottest time of the day approaches). When I open with this question, most people respond by saying that they would flip every rock until they find the $1 million dollar money order. Would you?

You begin flipping the rocks one by one to see if the prize is there. You flip 10 and do not find it. What would you do? Would you continue or hang your head low in shame; knowing that you have failed? If you would keep going, read on.

What would you do if you flipped over 20 more rocks and you still didn’t find the prize? Now 4 hours have passed and you have been flipping the smaller, easier rocks.

The challenge of the bigger ones looms ahead as you eye the pile. These bigger rocks require help. They require you to open-up, become vulnerable and share with someone else that you are having a challenge/struggle/problem, and ask for their help.

You rally some friends (a support group) and continue: flipping rock after rock. You all are hot, hungry, dirty, sweaty and prize-less. To make matters worse, the humidity seems to intensify as passerby’s mock you, your group and your rock turning efforts.

Some of the members of your team are wondering if you are crazy, and what/why they signed up for this. Would you continue on? You only have 20 more rocks to go.

You get a snack, patch up your cuts and bruises, and continue on. You find the money order under the very last rock that you flip.

Second, you get stronger and smarter with every flip, exercising your body physically, and your problem-solving skills mentally.

Third, every rock flips brings people together for one unifying cause. You “rally” the troops to support you through your tough time. You do not win the battle right away, but you receive victory on many different levels with every flip.

Can this be applied to life? Every test, every challenge, every obstacle, can be viewed as a flip of a rock. Keep flipping, you are one step closer to your goal.

How persistent are you? #GETAFTERIT

At the early age of 23, Jonathan began his professional football career after being drafted to the Edmonton Eskimos. Later, he went on to play for the Hamilton Tiger-Cats in 2010, and finally the Toronto Argonauts in 2013.

In 2011, he founded Ahead of the Game, a youth mentorship program designed to empower youth and promote positive change.

He and his team of facilitators have appeared at over 25 schools across the Greater Toronto Area and serviced over 1000 kids, youth, and young adults.

Ahead of the Game quickly garnered a high success rate, with 91% of regular attendees not only passing classes, but attending sessions more regularly, actively engaging in participation, and having less negative interactions in the classroom, as well.

Now, Jonathan uses his gifts to inspire both youth and corporate professionals alike to reach their highest potential and #GetAfterIt.

He graduated from St. Francis Xavier University with a Bachelor of Arts (Honours) degree in Psychology. He also holds a Master’s degree from The University of Western Ontario in Kinesiology/Sports Psychology.

Jonathan has made over 50 media appearances, appearing on popular media outlets such as CP24, City TV, Rogers TV and Breakfast Television, to name a few. He uses this platform to encourage others to #GetAfterIt and release their inner champion.

Gas prices rise across U.S. after three weeks of decreases