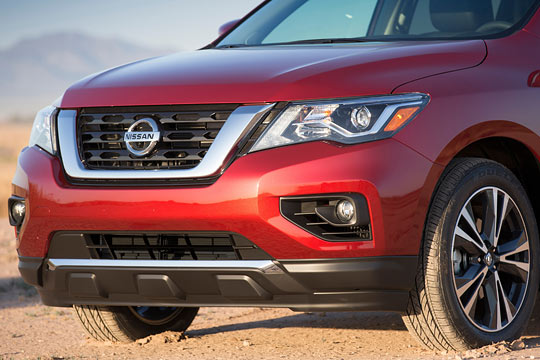 Refreshed model   The 30th anniversary of the original Pathfinder

This refreshed model resembles the outgoing 2016 model but with reworked front and back. The headlights, taillights, foglights, and daytime running lights were redesigned, and a new grill surrounds all this new lighting, giving the new Nissan the more powerful look. But the real deal is under the hood: Some 25% of new components and technologies create the VQ35DD engine. Along with the new combustion chamber design, the engine features new pistons, a new air intake system, and the new fully electronic timing on the intake side.

The engine's new Direct Injection Gasoline (DIG) system,known from the all-new flagship Nissan Armada full-size SUV, provides better wide. Horsepower for the new Pathfinder V6 is now 284 hp at 6,400 rpm (from the previous 260 hp) and torque is now rated at 259 lb-ft at 4,800 rpm (up from 240 lb-ft). And, while adding more horsepower and torque, Pathfinder fuel economy remains 20 mpg city, 27 mpg highway and 22 mpg combined for 2WD models. All 2017 Pathfinder models are equipped with Nissan's third-generation Xtronic transmission similar to that utilized in the sporty Nissan Maxima.

Maximum towing capacity has increased by 1,000 pounds to 6,000 pounds due to the enhanced powertrain and body reinforcements added around the trailer hitch area. The advanced Xtronic transmission design also helps keep engine rpm optimized while towing without the typical "hunting for a gear" feel. Building on those basics, Nissan started with the upgrade in the interior, paying attention to technologies drivers are used to use. For start, there is a next-gen infotainment system with an 8.0-inch color touch screen monitor.

Included as part of the standard NissanConnect system is SiriusXM Travel Link with three years of complimentary service. In addition, the standard Advanced Drive-Assist Display (ADAD) in the center of the instrument display between the tachometer and speedometer features additional infotainment and driver assistance displays. Voice recognition for audio, Bluetooth and vehicle information has been enhanced with a new HD microphone for improved voice clarity. HD Radio has also been added as a standard feature. ■