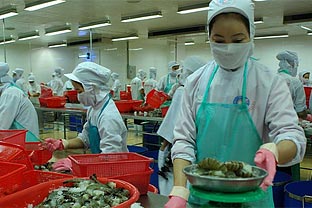 Vietnam expects to earn up to $2.6 billion from shrimp exports in 2013, up by 15 percent from last year.


The increase is attributable to the stability of the monthly average turnover of $250 million from shipping this produce, Vietnam News Agency (VNA) reported.

According to the Vietnam Association of Seafood Exporters and Processors (VASEP), seafood exports raked in $4.7 billion in the first nine months of this year, 4.5 per cent more than the same period last year, including $2 billion contributed by shrimp.

Bernama.com reports that the surge results from a hike in the global price of shrimp due to its scarce supply.

In the remaining months of this year, shrimp exports are expected to continue enjoying advantages thanks to positive signals in the United States market as the U.S. Department of Commerce (DoC) confirmed that Vietnamese businesses trading with the US do not dump their frozen warm-water shrimp products on the market.

The increase in shrimp exports is also attributed to changes in the global market when some countries are cutting down their export of shrimp due to infectious diseases. Vietnam has constrained the diseases, thus ensuring the supply of shrimp to the world. ■