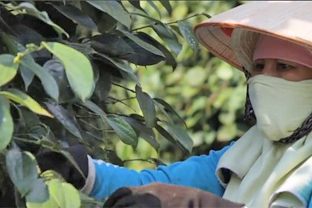 
Accounting for 30 percent of annual global pepper output and 50 percent of pepper export volume in world market, Vietnam has great influence on the price of the spice, said the association, adding that pepper's price is projected to stay high in the coming months.

Vietnam Pepper Association was quoted by VITIC as saying that Vietnam's pepper output in 2014 was expected to hit 150,000 tons, up 30,000 tons over the previous year.

Vietnam witnessed remarkable growth in pepper export revenue in most of its markets including Singapore, Pakistan, Thailand, Malaysia, France, and Kuwait among others.

In 2013, Vietnam succeeded in maintaining its position as the world's largest pepper exporter and producer, earning $900 million from selling 134,000 tons of pepper to overseas markets, up 13.4 percent in value and 14.9 percent in volume. ■