Staff writer ▼ | January 7, 2014
Vietnam's exports in 2014 are predicted to increase 10 percent to $145 billion thanks to an expansion into new markets and new trade deals. 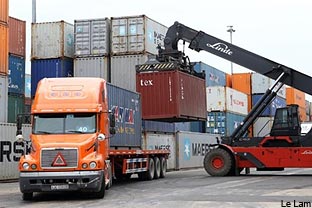 Vietnam's exports in 2014 are predicted to increase 10 percent to $145 billion thanks to an expansion into new markets and new trade deals.


The Trans-Pacific Partnership (TPP) agreement, which includes Vietnam, is currently being finalised, while five rounds of negotiations on a free trade agreement between Vietnam and the European Union (EU) were concluded. Other trade agreements are expected to be concluded this year, reports Viet Nam News.

The opportunities for Vietnamese exporters to increase their market share will increase enormously as the 12 countries involved in the TPP agreement make up 40 percent of global GDP and over 30 percent of the total world export-import revenue, according to the minister of Industry and Trade, Vu Huy Hoang.

Vietnam's Trade Counsellor in the United States (US), Dao Tran Nhan, noted that the US would continue to be Vietnam's largest market and predicted that exports to the US were likely to expand 10 percent this year.

Vice Chairman of the Vietnam Textile and Apparel Association Pham Xuan Hong said that Vietnam would continue to remain a priority destination for textile and garment importers in light of their trend of reducing production in China and relocating to other countries, including Vietnam, in recent years.

General Secretary of the Vietnam Seafood Exporters and Producers Truong Dinh Hoe forecast that shrimp and tra fish would continue to account for the country's key exports in 2014, reports Viet Nam News.