Staff writer ▼ | April 15, 2014
A new report by the Center for American Progress and the Center for Economic and Policy Research puts a dollar value on the economic importance of women's rising work hours since 1979. 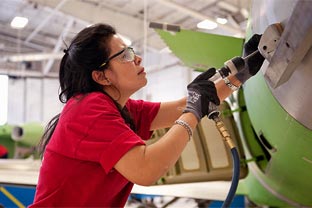 A new report by the Center for American Progress and the Center for Economic and Policy Research puts a dollar value on the economic importance of women's rising work hours since 1979.


According to the report, gross domestic product, or GDP, was roughly 11 percent higher in 2012 because women's employment patterns changed over the past three decades. In today's dollars, this translates to more than $1.7 trillion in output—roughly equivalent to combined U.S. spending on Social Security, Medicare, and Medicaid in 2012.

Over the past three decades, there has been a steady rise in the share of women, especially mothers, in the workforce.

Middle-class households would have substantially lower earnings today if women's employment patterns had remained unchanged over the past three decades.

The importance of mothers' additional hours of work and their earnings to our economy lend a new urgency to rethinking U.S. labor standards for the 21st century. Even as mothers and women are making significant contributions to the U.S. economy, they continue to do so within a set of outdated workplace norms that are completely unsuited to the 21st century workforce in which most parents work out of the home and must juggle both work and family responsibilities.

To address these issues, the report recommends giving workers more control over their schedules with a right-to-request law, instituting a national family and medical leave insurance program, and allowing workers to earn paid sick days.

The paper was originally presented at the 75 Years of the Fair Labor Standards Act Conference at the U.S. Department of Labor, and the research was supported by the Rockefeller Family Fund. ■