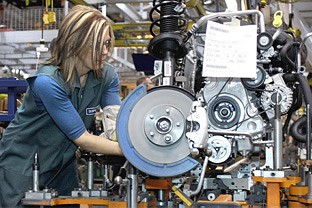 
The flash PMI index, which is based on approximately 85% of usual monthly replies, was up slightly from July's 53.7 to 53.9, and suggested a moderate expansion of the manufacturing sector.

Companies received a larger volume of new orders in August, with a number of companies linking this to greater demand and new client wins. Moreover, the rate of growth was strong and, having accelerated for the fourth month running, the fastest since January.

Production was raised to accommodate the increase in new orders. Output rose moderately, but the rate of growth nonetheless slowed to a three-month low and was weaker than the average for the year so far.

Concurrently, stocks of finished goods were depleted at the strongest pace since September 2009. Backlogs of work were meanwhile broadly the same as one month previously.

Manufacturing employment increased for the second month running in August. The rate of job creation was moderate and, having quickened slightly since July, the fastest in four months. Firms that hired additional staff generally cited increased workloads. ■