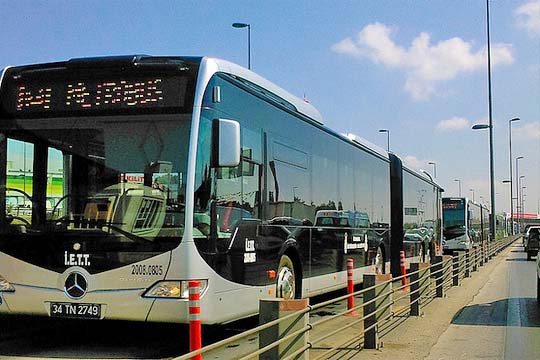 Traffic   Working above capacity
The Metrobus network, which carries an average of 780,000 Istanbulites daily, has been upgraded with a project developed by the Turkey's top scientific institution, TUBITAK.

Project manager Fahrettin Eldemir said the network's buses currently operated at peak times at 108 percent of their capacity. "[With the project] this peak is reduced to 94 to 95 percent at the busiest times. Even if it is rush hour, passengers will be able to get onto the buses; they will not wait because they could not get on due to crowds," Eldemir said.

Researchers first analyzed passenger trends, collecting data on where they tended to get on and off. The speed of the buses and the distance between stops was included to make a statistical analysis, and after modelling the system and testing the model through simulations, two new lines were introduced without big costs.

At the beginning of the project, 407 vehicles were operating in the Metrobus system, but the figure has risen to 450 with the project, Eldemir said, while admitting that merely increasing the number of buses was not a long-term solution.

Kratos appoints Amy Zegart to board