Staff writer ▼ | May 5, 2014
Alexey Miller, chairman of the Gazprom's management committee, and Gerhard Roiss, chief executive officer of OMV, signed a Memorandum of Intent to implement the South Stream project in Austria. 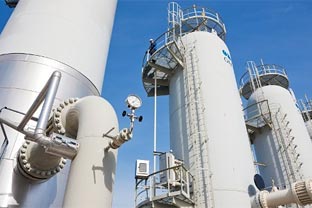 Alexey Miller, chairman of the Gazprom's management committee, and Gerhard Roiss, chief executive officer of OMV, signed a Memorandum of Intent to implement the South Stream project in Austria.


The Memorandum reflects the parties' intentions to construct the Austrian section of the South Stream gas pipeline with the throughput capacity of up to 32 billion cubic meters a year and the end point in Baumgarten. The gas pipeline will run from the Black Sea coast in Bulgaria through Serbia and Hungary to Austria.

It is planned to obtain all the required construction permits before the end of 2015. First gas supplies are scheduled for 2017. The Austrian section will reach its full capacity by January 2018.

"The relevancy and the benefits of South Stream for Europe are undisputed. The South Stream project is aimed at enhancing the energy security of European consumers, which has always been Gazprom's top priority. In addition, it should be noted that Gazprom and OMV have a sound international legal basis for implementing this project, which is the agreement signed by the Russian and Austrian Governments in April 2010," said Alexey Miller.

"It is a crucial step towards safeguarding the security of natural gas supplies to Austria and it will reinforce the role of Baumgarten as a key gas hub in Central and Eastern Europe. Our cooperation with Gazprom, which has lasted for about 50 years, contributed to the success of this undertaking that will help further diversify energy supply routes to Europe," said Gerhard Roiss.

In addition, the Memorandum stipulates Gazprom's participation in the Central European Gas Hub as well as providing Gazprom with access to OMV gas storages in Austria.

Gerhard Roiss also presented Alexey Miller with a letter from Austrian Minister of Economy Reinhold Mitterlehner expressing his support to the parties engaged in the South Stream implementation in Austria. ■

Greece to invest 500m euros per year in tourism

EL AL to launch internet on board its flights to Europe