Staff writer ▼ | July 5, 2013
South Africa is seeking permission for a sale of some of its $1 billion stockpile of rhino horn to finance conservation and fight black market. 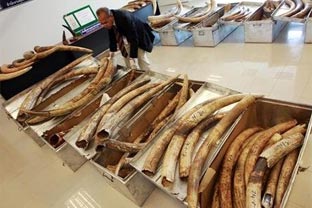 South Africa is seeking permission for a sale of some of its $1 billion stockpile of rhino horn to finance conservation and fight black market.


South African conservation groups fear the plan could end up increasing demand in major markets such as Vietnam, where the horn is sought after for use in traditional medicine, as well as enriching black-marketeers. Environment minister Edna Molewa said that South Africa, home to 73% of the world's rhinos, would seek permission for the sale at the next major meeting of CITES, the Convention on International Trade in Endangered Species, in 2016.

"South Africa cannot continue to be held hostage by syndicates who are slaughtering our rhinos," Mr. Molewa said.

South Africa is home to more than 20,000 rhinos but is set this year to lose almost 800 of them to poachers. Poaching is increasing at such a rate that by the time of the meeting, the number of rhinos being killed or dying each year will exceed the number being born.

The biggest market for illegal rhino horn in recent years has been Vietnam, where the product is sold in pharmacies and over the internet at about $65,000 a kg, making it more expensive than gold. At this price, South Africa's stockpile of 16,400 kg would be worth just over $1 billion. ■