Saudi Arabia to use shale gas for electricity

Staff writer ▼ | October 16, 2013
Saudi Arabia is preparing to be among the first countries outside North America to use shale gas for power generation and thereby save more of its crude oil for lucrative exports. 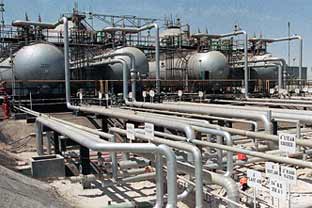 Saudi Arabia is preparing to be among the first countries outside North America to use shale gas for power generation and thereby save more of its crude oil for lucrative exports.


"We are ready to start producing our own shale gas and unconventional resources in various types in the next few years and deliver them to consumers. Only two years after launching our own unconventional gas program, in the northern region of Saudi Arabia, we are ready to commit gas for the development of a 1,000 MW power plant which will feed a massive phosphate mining and manufacturing sector," Saudi Aramco CEO Khalid Al-Falih said at the World Energy Congress in South Korea.

The Saudi Arabian Mining Co. (Maaden) plans to invest in a phosphate project which is part of a new industrial city called Waad Al-Shimal City for Mining Industries, with production expected to start by the end of 2016. By unlocking its gas reserves, Saudi Arabia could use the fuel to power its domestic economy and allow more room for oil sales to world markets.

Petroleum and Mineral Resources Minister Ali Al-Naimi has given an estimate of moer than 600 trillion cubic feet of unconventional gas reserves, more than double its proven conventional reserves.

That would put Saudi Arabia fifth in a 32-country shale gas reserves ranking compiled for the US Energy Information Administration. China tops the list and has already signed production-sharing deals and awarded exploration blocks as it targets output of 6.5 billion cubic meters a year by 2015. ■