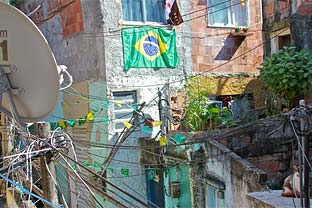 The income injected in the city of Rio de Janeiro during the World Cup reached $1.976 billion (or R$ 4.4 billion), the Municipal Tourism Secretariat announced.


According to the city hall, the figures surpass the $449 million projection announced before the event by the Ministry of Tourism.

Data showed that the number of tourists in the city reached 886,000, and the majority of them (471,000) were foreigners. Average tourist expenditure in the city was $287 (or R$ 639) and average length of stay was nine days. Average occupancy rate of hotels was 93.8%, reaching 99.75% during the final, according to the Brazilian Hotel Industry Association (Abih).

The municipal secretary of Tourism, Antônio Pedro Figueira de Melo, pointed out that the event brought to the city tourists who were not necessarily considering visiting Rio de Janeiro: "That is why it is so important that they have evaluated Rio positively and said they would recommend it when they went back home. These are people we have to captivate."

A satisfaction survey made by a market intelligence agency, GMR Inteligencia de Mercado, at the city hall’s request showed that 98.3% of the foreigners would recommend Rio de Janeiro to relatives and friends. ■

FAA issued warning on potential hazards over Ukraine - in April