Staff writer ▼ | July 24, 2014
The challenges facing oil and gas companies operating in Africa continue to be diverse and numerous fuelled by fraud, corruption, theft, poor infrastructure and a lack of skilled resources, among others. 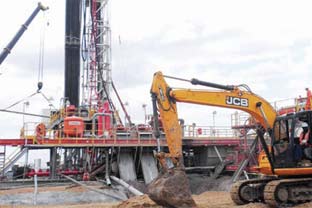 The challenges facing oil and gas companies operating in Africa continue to be diverse and numerous fuelled by fraud, corruption, theft, poor infrastructure and a lack of skilled resources, among others.


Regulatory uncertainty and delays in passing laws are severely inhibiting sector development in many countries around the continent.

"Some key players have delayed or cancelled projects until further clarity can be sought in their respective jurisdictions as they cannot move forward with doubts given the long-term nature of the needed investments," says Chris Bredenhann, PwC Africa Oil & Gas Advisory Leader.

PwC's"Africa oil & gas review" analyses what has happened in the last 12 months in the oil & gas industry within the major African markets. The survey draws upon the valuable experience and views of industry players in Africa, including international oil companies operating on the continent, national oil companies, services companies, independent oil organisations and industry commentators, to provide insight into the latest developments affecting the industry.

The Review shows that the oil & gas industry in Africa continues to show substantial growth, with new hydrocarbon provinces developing at a significant pace. "Large gas finds in Mozambique and Tanzania have caused the world to take note of East Africa as an emerging player in the global industry,' says Bredenhann.

The inadequacy of basic infrastructure also ranked much higher in the current Review than in prior years. Respondents are concerned about the lack of infrastructure in developing countries and the negative consequences this may have for their businesses, especially those operating in Nigeria, Namibia, Madagascar and South Africa. Taxation issues have also become a concern to companies across Africa as uncertain taxation as well as new tax laws have created an additional financial burden for companies. ■