Staff writer ▼ | April 17, 2015
Persistent low wages in the U.S. are costing taxpayers approximately $153 billion every year in public support to working families, including $25 billion at the state level. 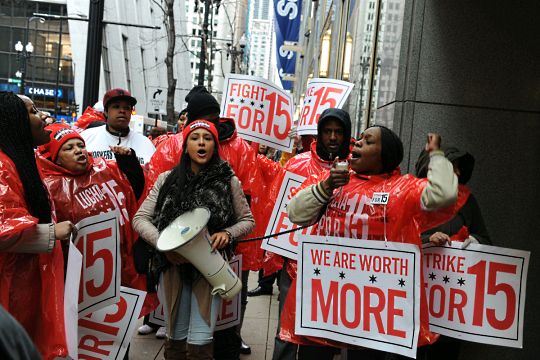 Report   The University of California, Berkeley:
52
percent of state public assistance spending supports working families.
This is according to a new report from the University of California, Berkeley, Center for Labor Research and Education. The report details for the first time the state-by-state cost to taxpayers of low wages in the United States.

Following decades of wage cuts and health benefits rollbacks, more than half of all state and federal spending on public assistance programs (56 percent) now goes to working families, the report documents.

On average, 52 percent of state public assistance spending supports working families, with costs as high as $3.7 billion in California, $3.3 billion in New York and $2 billion in Texas.

Reliance on public assistance can be found among workers in a diverse range of occupations, including frontline fast-food workers (52%), childcare workers (46%), home care workers (48%) and even part-time college faculty (25%).

From 2003 to 2013, wage growth remained flat or negative for the entire bottom 70 percent of workers in the United States, Jacobs said. Over the same time, the share of non-elderly Americans receiving health insurance from an employer fell almost 10 percentage points, from 67 percent to 58 percent.

Despite modest pay raises at some of the country's largest and most profitable employers, including Walmart and McDonald's, wages continue to lag far behind inflation.

In recent months, the substantial cost of low wages has prompted elected officials to take action. California, Colorado, Maine, Oregon and Washington are considering increasing the minimum wage to $12 or higher.

In Connecticut, a proposal currently moving through the state legislature would fine large companies that pay low wages in an effort to recoup the cost these companies impose on taxpayers. The Congressional Democrats' fiscal year 2016 budget proposal unveiled last month included a provision that would roll back tax breaks for large companies that fail to raise pay on pace with inflation. ■

Wages around the world vary widely
Wages in Finland sum grew by 2.8 percent year-on-year
Poverty in Italy worst in 10 years

Google to invest $1 billion in Iowa

Inslee expands drought emergency to include half of Washington