Over 1,000 Myanmar migrant workers return from Thailand in single day

Staff Writer | December 27, 2017
About 1,137 Myanmar migrant workers returned home from Thailand on Tuesday, a day after Christmas, according to the Home Affairs Ministry. 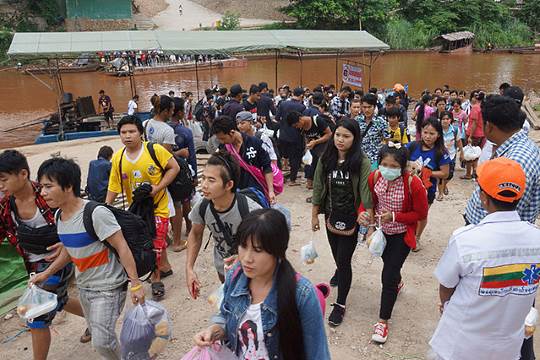 The return in a single day has brought the total number of returnees since June 29 to 162,621.

Undocumented Myanmar migrant workers have been fleeing back home although Thai authorities had delayed the full enforcement of a new labor law introduced in late June.

The law, which was originally aimed at tackling human trafficking concerns and regulating foreign workers in Thailand, sparked panic and prompted more than 60,000 foreign workers to flee the country, many of them are from Myanmar, Laos and Cambodia.

The influx has overtaxed social agencies and border crossing as border gates restricted the number of crossing to only 100 people a day, causing hardship for many Myanmar migrants to have enough food and lodging while waiting for the border crossing, reports said.

The new decree imposes heavy fine on employers and employees who do not have work permits.

In a bid to solve the problem of undocumented Myanmar migrant workers who are returning home out of fear of the new labor law, authorities of the two countries negotiated on issuing official documents to the workers, the authorities said.

There were about 4 million legal and 1 million illegal Myanmar workers reportedly staying in Thailand. ■

Solar system could have formed in bubble around giant star