One camera to rule them eleven in the UK

Staff writer ▼ | July 12, 2013
The British Security Industry Authority (BSIA) estimated there are up to 5.9 million closed-circuit television cameras in the country or, in other words, one for every 11 people. 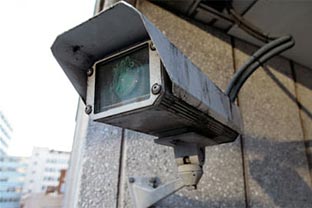 The British Security Industry Authority (BSIA) estimated there are up to 5.9 million closed-circuit television cameras in the country or, in other words, one for every 11 people.


There are 750,000 in sensitive locations" such as schools, hospitals and care homes. The survey's maximum estimate works out at one for every 11 people in the UK, although the BSIA said the most likely figure was 4.9 million cameras in total, or one for every 14 people.

"This study represents the most comprehensive and up to date study undertaken into the number of CCTV cameras in use in the UK. Because there is no single reliable source of data no number can ever be held as truly accurate however the middle of our range suggests that there are around five million cameras," said Simon Adcocks of the BSIA. He added that in 2009 95 percent of Scotland Yard murder cases used CCTV footage as evidence.

"This report is another stark reminder of how out of control our surveillance culture has become. With potentially more than five million CCTV cameras across country, including more than 300,000 cameras in schools, we are being monitored in a way that few people would recognise as a part of a healthy democratic society.

"This report should be a wake up call that in modern Britain there are people in positions of responsibility who seem to think ‘1984' was an instruction manual," said Nick Pickles, director of the privacy campaign Big Brother Watch.

The survey included all cameras in public and private areas, regardless of whether the images are recorded or watched live. It estimated there are between 291,000 and 373,000 cameras in public sector schools, plus30,000 to 50,000 in independent schools. Surgeries and health centres have an estimated 80,000 to 159,000, while there are believed to be between 53,000 and 159,000 cameras in restaurants, the report said. ■

Pioneer's high-end entertainment for the road