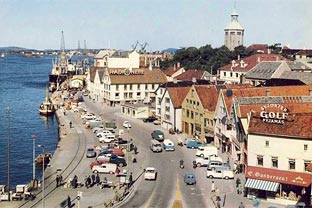 After a weak 2nd quarter, growth in mainland Norway's gross domestic product (GDP) rose to 0.5 percent in the 3rd quarter, according to seasonally-adjusted volume figures.


This is somewhat lower than trend growth. Growth was evident mainly in goods-producing industries and general government. Value added in petroleum activities and ocean transport increased by 1.5 percent in the 3rd quarter, which contributed to a growth in total GDP of 0.7 percent.

Gross value added in manufacturing grew by 1.5 percent in the 3rd quarter of 2013. The strong growth was for the most part due to increased activity in machinery-producing industries, production of food products, and parts of commodity manufacturing. Value added in building of ships, oil platforms and modules fell after several quarters of marked growth.

Within other goods-producing industries, it was mainly construction that increased in the 3rd quarter; up by as much as 2.9 percent. Traditional fisheries and electricity production contributed to dampen growth from the 2nd to the 3rd quarter.

In construction, due to new information, an upward revision of the 2nd quarter estimate has led to a seasonally-adjusted growth rate of 1.9 percent from the 1st to the 2nd quarter.

Household consumption abroad was up 5 percent, and contributed with 0.4 percentage points to the growth in household final consumption expenditures.

Gross fixed capital formation (GFCF) in mainland Norway fell by 0.3 percent in the 3rd quarter. Growth in GFCF was seen in general government and dwellings, while GFCF in industries was lower than in the previous quarter.

GFCF in petroleum-related activities continued to grow in the 3rd quarter and were up 1.5 percent from the 2nd quarter. GFCF in the three first quarters of 2013 was about 16 percent higher than in the same period in 2012.

Exports grew by 0.1 percent in the 3rd quarter. Exports of crude oil were up, while exports of traditional goods fell by 2 percent and were at the lowest level since the 4th quarter of 2011.

Imports grew by 2.6 percent, with growth in the import of both traditional goods and services, which is seen in conjunction with the fall in imports in the 2nd quarter.