Staff writer ▼ | April 25, 2013
The Norwegian government gave a go to a plan to create the world's first ship tunnel: 45 meters high and 36 metres wide, the 1.7 kilometers long Stad Ship Tunnel will be able to accommodate 16,000 tonne freight and passenger ships. 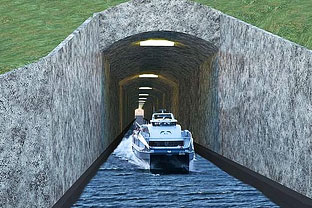 The Norwegian government gave a go to a plan to create the world's first ship tunnel: 45 meters high and 36 metres wide, the 1.7 kilometers long Stad Ship Tunnel will be able to accommodate 16,000 tonne freight and passenger ships.


Shipping is Norway's second most important industry, and the Stad peninsula is the place where no ship captain wants to get in trouble: fierce weather conditions can endanger any ship. Its peak is at 645 meter, and its situated between the Norwegian Sea and the North Sea.

So, what can Norway, the world-leader in tunneling, do? They decided to put their knowledge to use and make the world's first proper tunnel. At the end of the day, if they can make the world's longest road tunnel, it's just matter of putting tunnel-building technology to different use.

"It isn't an unheard of challenge, it involves building a cofferdam or watertight enclosure at either end to keep the water out until excavation is complete," explains Robert Benaim, Fellow of the Royal Academy of Engineering.

Engineers will drill and blast through the rock at sea level before removing the dams so the sea can flood a 12 meter deep channel for ships to travel in. The purpose of the tunnel is not to save time but it will make traveling much safer and captains will not have to pay attention to weather anymore. At the same time more safety means more business for ports in Norway.

"As the sea is the backbone of transport along the west coast of Norway, public transport could be upgraded with improved regularity in cargo services and a new year-round high-speed passenger ferry service between the coastal cities of Bergen and Alesund."

The budget is an estimated $296 million (1.7 billion kroner), and the plan must still be approved by parliament. ■