Staff writer ▼ | September 9, 2014
A second causeway linking Bahrain with Saudi Arabia and providing a route for a regional railway network being built by Gulf monarchies will cost about $5 billion, a minister said. 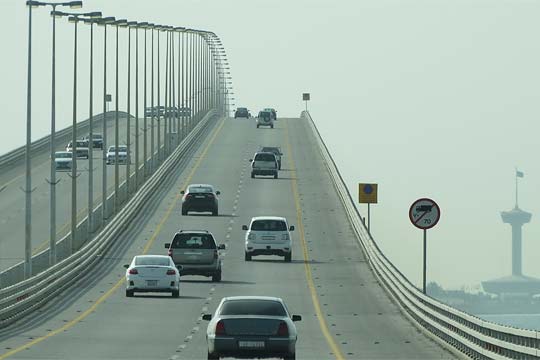 Gulf monarchies   Part of the Gulf Cooperation Council railway network
"The cost of the causeway will be roughly $5 billion," Bahrain's Transport Minister Kamal bin Ahmed told AFP on the sidelines of a two-day business conference, adding that it will be "part of the Gulf Cooperation Council (GCC) railway network. We have almost finalised the routes of the causeway."

Details of the project for the causeway which will be used by vehicles as well as freight and passenger trains will be discussed at a joint meeting next month, he said.

Teams from both countries are "still working on other technical issues including financing," especially on how to get the private sector involved, the minister said. However said no date has been fixed for the start of the project. "We need it to start soon."

Gulf neighbours Bahrain and Saudi Arabia have been linked since 1986 by a 25-kilometre (16-mile) causeway used by several million people every year. Saudi King Abdullah announced the plan for the new causeway last week in a meeting with King Hamad, saying the new link will be named after Bahrain's monarch.

The GCC railway network is expected to be completed by 2017. The regional network is planned to stretch over a distance of 2,000 kilometres (1,243 miles) and will cost an estimated $20 billion. ■

Gulf construction projects at $72 billion
More than 100 companies to invest $1.8bn in Bahrain
U.S. investment in Saudi Arabia worth $10 billion