Staff writer ▼ | July 2, 2013
Mexico has suspended rice imports from Pakistan following the disvocery of the Khapra beetle in some shipments from Pakistan. 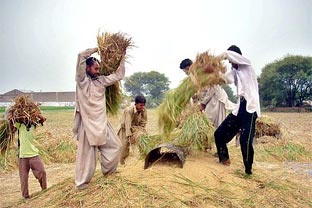 
Some 3,000 tons of Pakistan rice shipment was placed in quarantine and may be destroyed or returned to Pakistan. Customs officials have been asked to inspect every rice shipment from Pakistan for contamination, they said and added other Asian countries, including Vietnam and Thailand, are still permitted to export rice to Mexico.

The Mexican Port should return rice containers in which the khapra beetle was found and other containers should be examined to check for contamination. The transit period from Pakistan to Mexico is around 70 days and if transit time exceeds this, there is a chance of contamination.

The rice exporters said that they will examine the containers to find out the exact reason for the contamination and has alleged that American and Mexican lobbies want to prevent Pakistan rice imports to Mexico because Pakistan rice is about $100 per ton cheaper than US rice. However, most of the U.S. rice that Mexico imports is rough rice, milled by Mexico's domestic mills. Only the U.S. and Brazil allow exports of rough rice, they added.