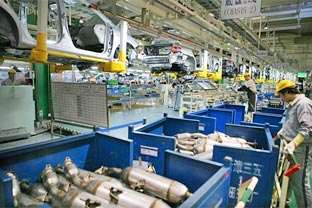 China's manufacturing activity contracted for the second month in a row in February, hitting a seven-month low and dividing economic opinion.


The HSBC/Markit China flash manufacturing PMI for February dipped to 48.3 from a final reading of 49.5 in January, showing manufacturing conditions deteriorating at a moderate pace in February, said data company Markit in a statement on Thursday. The flash reading was below the market consensus of 49.5.

According to Markit, new orders fell to 48.1 in February from January's 50.1 and production to 49.2 from 50.8 in January. New export orders rose to 49.3 from January's 48.4. PMI figures above 50 percent indicate expansion and below 50 percent, contraction.