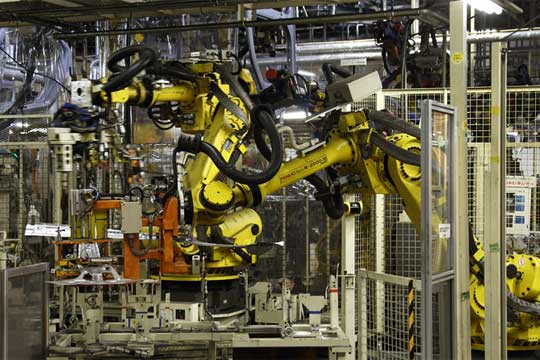 Help in the factory   Robot sales increased 12 percent
The industry is hitting a record high in 2013 with annual sales and ownership arriving at 178,000 units and 1.332 million units, up 12% and 7.9% year on year, respectively.

Global industrial robot capacities are concentrated in Japan, about 60% of the global total, while sales markets are mainly in Japan, the U.S., Germany, South Korea and China, which held a combined share of 70.2% in 2013.

In spite of this, the Chinese industrial robot market is still dominated by foreign companies, which sold more than 27,000 units of industrial robots in China in 2013, 74% of total sales volume, of which ABB, FANUC, Yasukawa Electric and KUKA occupied 65% or so, and nearly monopolized high-end fields like industrial robot manufacturing and welding.

In addition, China's industrial robot density (the number of robots used by every 10,000 workers) is much lower than that in developed countries, standing at only 30 in 2013, well below the global average of 62, in stark contrast to 437 in South Korea, 323 in Japan and 282 in Germany around the same time. ■