Staff writer ▼ | December 7, 2013
The global deal aimed at boosting commerce, which could add nearly $1tn to the global economy, has been described by The World Trade Organization (WTO) and others as a historic deal. 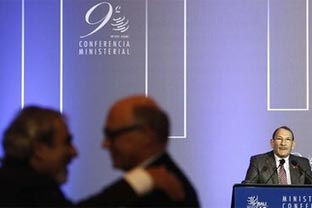 The global deal aimed at boosting commerce, which could add nearly $1tn to the global economy, has been described by The World Trade Organization (WTO) and others as a historic deal.


Commerce ministers from around the world have approved a WTO agreement to lower trade barriers that they hailed as a "historic" boost for the trade body. The agreement reached on Saturday in Bali, Indonesia, falls far short of WTO's vision of tearing down global trade barriers but the accord reached on the Indonesian island of Bali is the first global agreement struck by the Geneva-based body since its 1995 founding.

"For the first time in our history, the WTO has truly delivered," said Roberto Azevedo, WTO director-general.

The pact includes commitments to facilitate trade by simplifying customs procedures. The Washington-based Peterson Institute for International Economics estimated in a report this year the customs measures could create $1tn in economic activity and 21 million jobs if properly implemented.

WTO officials have conceded, however, that uncertainty surrounded how effectively the measures would be implemented, especially in underdeveloped countries. Analysts say the hard-fought nature of the talks indicates how difficult it could be for the body to make real progress on the Doha Round, launched in Qatar in 2001.

The agreement was reached after more than four days of haggling in Bali that stretched past the conference's Friday deadline and overnight.

Gita Wirjawan, Indonesia's trade minister, called the accord "historic". He said it had important symbolic value for Doha. "The decisions we have taken here are an important stepping-stone toward the completion of the Doha Round."

The Doha Round aims to remove hurdles to commerce and establish a globally binding framework of trade rules fair to both rich and poor countries but protectionist disputes among the WTO's 159 members have foiled agreement. Azevedo has expressed concern over the rise of alternative regional trading pacts that he fears could render the WTO obsolete if the Geneva-based body did not start clinching major worldwide agreements. ■