Staff writer ▼ | March 4, 2014
In its Q1 2014 economic forecast and report, the Department of Business, Economic Development and Tourism of Hawaii said it expects continued economic growth in 2014 and each year through 2017. 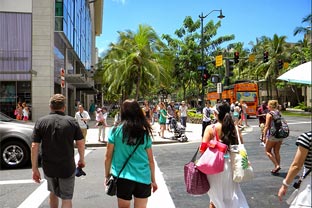 In its Q1 2014 economic forecast and report, the Department of Business, Economic Development and Tourism of Hawaii said it expects continued economic growth in 2014 and each year through 2017.

"We expect the construction industry to lead our economic growth in the next few years. Externally, economic conditions are improving in the U.S. economy. In Hawaii, tourism's growth, despite record visitor arrivals last year, is stabilizing, so we are depending on construction to be a strong economic driver," said DBEDT Director Richard C. Lim.

DBEDT expects Hawaii's economy to grow by 2.6 percent in 2014. Although the rate is slightly lower than projected three months ago, it remains positive if compared to an average growth rate of 1 percent over the past 20 years in Hawaii.

In 2013, Hawaii private non-agricultural firms added 9,600 jobs to their payrolls, representing a 2 percent increase from 2012. The construction industry added 2,500 payroll jobs, followed by food services with 1,750 jobs more and other services with 1,575 jobs added. Both federal and state government lost jobs during 2013. The contracting tax base, which is an indicator for construction completed, increased by 10.3 percent during the first nine months of 2013.

In 2013, Hawaii welcomed 8.2 million out-of-state visitors, representing a 2.6 percent increase from 2012. This arrival number was a new record for Hawaii arrivals. Total visitor spending increased at a modest rate of 2 percent in 2013, mainly due to the overall decrease in length of stay and a significant decline in Japanese visitor spending resulting from the depreciation of Japanese yen.

Forecast for 2014 visitor arrivals in now at 1.7 percent and visitor spending at 3.4 percent. These forecasts are based on the moderate growth in scheduled air seats, the decrease in schedule cruise ship arrivals, and the continued increase in hotel room rates during 2014.

The current forecast for 2014 real gross domestic product for Hawaii is a 2.6 percent growth, lower than the 2.8 percent forecasted last quarter. Real GDP growth rates in future years are expected to be at the 2.2 percent range.

DBEDT expects the Honolulu Consumer Price Index, a proxy for inflation, to rise by 2.1 percent in 2014 and will increase gradually to the 3 percent by 2016. The average Honolulu consumer inflation rate between 1990 and 2013 was 2.7 percent.

Real personal income growth in 2014 is currently forecasted to be 2.8 percent and remains at above 2 percent throughout 2017. The civilian unemployment rate is projected to be 4.2 percent in 2014 and 4 percent in 2015. The national unemployment rate is projected by the top 50 economic organizations at 6.6 percent for 2014, and 6.1 percent for 2015. ■