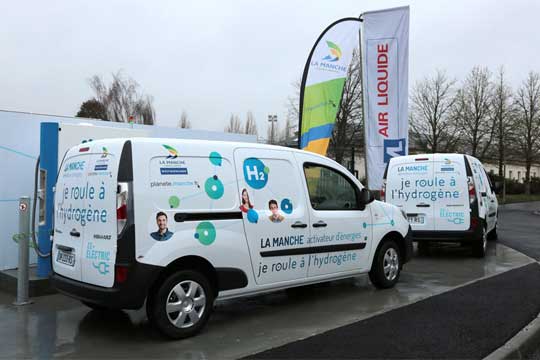 The HyWay program, coordinated by the Tenerrdis energy cluster, reached yet another milestone with the delivery of an initial fleet of 21 hybrid electric-hydrogen vehicles - the largest currently on the road in Europe - to Grenoble.

Test users will be able to fill up on hydrogen at the Air Liquide filling station in Sassenage (near Grenoble) and at the Symbio FCell and French Alternative Energies and Atomic Energy Commission (CEA) campuses in Grenoble.

Another, larger-capacity hydrogen filling station is slated to open, also in Grenoble, at the GEG (the local gas and electric utility) campus.

Ultimately, the station will be supplied by a green hydrogen production unit operated by Cofely Services and equipped with McPhy Energy electrolyzers.

The vehicles offer a range of up to 300 km per day in intensive city driving conditions. The vehicles, adorned with the logos and graphics of their test users, were unveiled at Grenoble-area Renault dealership AutoLosange of Fontaine on June 10, 2015. ■