Staff writer ▼ | January 7, 2014
The global economy continued to register solid output growth during December. At 54.0, little-changed from November's 54.2, the JPMorgan Global All-Industry Output Index remained at a level broadly in line with its long-run average. 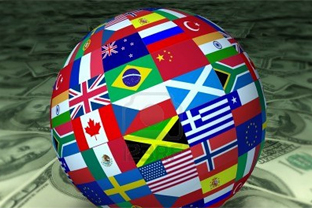 The global economy continued to register solid output growth during December. At 54.0, little-changed from November's 54.2, the JPMorgan Global All-Industry Output Index remained at a level broadly in line with its long-run average.


The index is produced by JPMorgan and Markit in association with ISM and IFPSM. The headline Output Index has now signalled expansion for 15 successive months. Although the average rate of growth during the final quarter of last year was slightly slower than in Q3, the expansion signalled for 2013 as a whole was faster than 2012.

December's increase in global economic output was led by the manufacturing sector. Production at the world's factories rose for the fourteenth consecutive month and at the quickest pace since February 2011. Business activity at service providers also increased further, despite the rate of expansion easing slightly.

The UK maintained its position at the top of the PMI allindustry output growth league table, followed by Ireland and then the US. Rates of expansion also remained robust in Germany and Japan, and accelerated in Spain.

Growth was comparably muted in China, Russia and Brazil, Italy stabilised, while France and India registered further contractions. Levels of incoming new business rose at the fastest pace in almost three years during December, as growth in new orders held broadly steady at November's high at manufacturers and accelerated to a 34-month record at service providers.

The improvement in new order inflows led to higher backlogs of work in both sectors. The strain on capacity encouraged a further increase in global employment. Job creation was registered for the forty-sixth straight month, with the rate of expansion the sharpest since March 2011. Growth in payroll numbers accelerated in the US (33-month high), Germany (near two-year peak) and the UK.

Staffing levels also increased further in Japan and Brazil – albeit at slower rates than November - returned to growth in India and held broadly steady in the eurozone and China. France, Italy, Spain and Russia reported further job losses.

Average input costs rose further during December. The rate of increase has tracked sideways through the second half of 2013, but at a pace above those signalled through the opening half of the year. ■