Staff writer ▼ | January 29, 2014
A flood-tolerant hybrid rice that improves yields in India by almost half has been found to benefit marginalized people living in flood-prone areas. 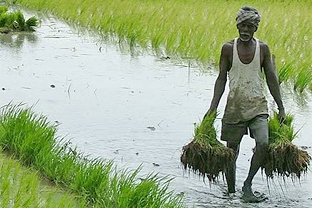 A flood-tolerant hybrid rice that improves yields in India by almost half has been found to benefit marginalized people living in flood-prone areas.


Researchers from the International Rice Research Institute (IRRI) and the University of California, Berkeley, conducted randomized field trials in 128 villages in the eastern Indian state of Odisha, on Swarna-Sub1, a new variety that they developed by transferring a gene for flood tolerance, which allows plants to survive under submerged conditions, into Swarna, a rice variety commonly cultivated in India.

The trials showed that yields of Swarna-Sub1 could be 45 percent higher, even when it was submerged under water for one to two weeks, compared to Swarna. The results were reported in the journal Scientific Reports.

The report says that low-lying flood-prone areas tend to be more heavily occupied by people belonging to socially disadvantaged groups. So, a policy-relevant implication of the findings is that "flood-tolerant rice can deliver both efficiency gains, through reduced yield variability and higher expected yield, and equity gains in disproportionately benefiting the most marginal group of farmers."

Flash floods are common in 44 million hectares where rice is grown in India; and Swarna Sub-1 would prove beneficial if grown in 12-14 million hectares, or almost a third of the rice cultivated area, the report says.

Although other flood-tolerant rice varieties were developed earlier, Swarna-Sub1 is the first to be released to farmers for cultivation. ■