Fisheries and aquaculture are African strengths

Staff writer ▼ | July 25, 2014
The fisheries and aquaculture sector has contributed greatly to Africa’s overall economy, according to a study by the FAO. 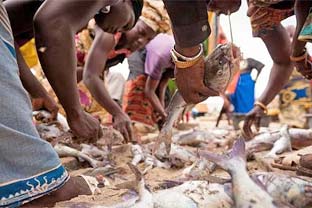 The fisheries and aquaculture sector has contributed greatly to Africa’s overall economy, according to a study by the FAO.


The FAO revealed in a report that the value added by the fisheries sector as a whole – which is referring to inland and marine capture fisheries, post-harvest, licensing of local fleets and aquaculture, reached more than $24bn in 2011, representing 1.26 per cent of the GDP of all African countries.

Aquaculture is still expanding in Africa already in a few countries and it currently produces an estimated value of almost $3bn a year, the FAO said.

Around 25 per cent of all marine catches around Africa are still by non-African countries. The sector as a whole employs 12.3mn people as full-time fishers or full-time and part-time processors, representing more than two per cent of 15-64 years old in Africa.

"The value of African fisheries" study was carried out in the framework of the New Partnership for Africa’s Development (NEPAD)-FAO Fisheries Programme (NFFP), financed by the Swedish International Development Cooperation Agency (Sida). ■