Staff writer ▼ | November 24, 2014
Houston based Noble Energy made the official opening of the temporary dock facility (TDF) in Stanley, an essential piece for the logistics of the industry which is scheduled to begin another round of exploratory drilling in the first quarter of next year. 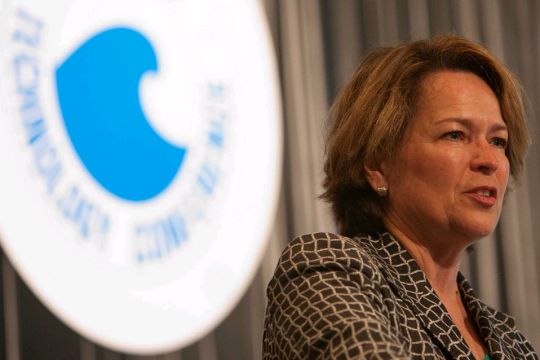 Beginning 2015   After 5,000 kilometers and 47 days
"The official opening of the temporary dock facility is an important milestone and an icon of the future exploration campaign", said Noble Energy's Senior Vice President Susan Cunningham, as a group of guests took a tour of the facility.

Ms. Cunningham is making her second visit to the Islands having first visited in March, just before the dock Nobel Frontier arrived under tow in the Islands after travelling 5,000 kilometers over 47 days from New Orleans.

The first shipment of drilling supplies are due to be unloaded at the dock at the end of the month and the Eirik Raude semisubmersible drilling rig is due to arrive in March 2015.

Noble plans to drill the Humpback prospect well in mid 2015, "and we all hope we will have a real celebration then," said Ms Cunningham.

Operations Manager Joel Landry said they had been really lucky to find the barge which was originally used for construction then converted to fuel service which meant the tanks were in pristine condition and the deck was rated for heavy lifts. He said the barge cost 5 million dollars. Twelve to fifteen million had been spent on getting the four dolphins constructed and installed and the causeway consisting of some 60 cubes, in the region of 3 million. ■