Staff writer ▼ | November 4, 2014
The eurozone manufacturing sector remained in a state of near-stagnation in October, as weak demand continued to restrict growth of both output and employment across the currency union. 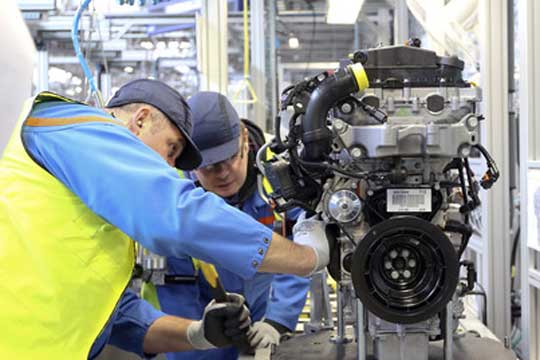 October   Only Germany signal improved overall manufacturing performance
The Markit Eurozone Manufacturing PMI came at 50.6 in October, up from September's 14-month low of 50.3 registered only marginally above the neutral 50 mark. That said, the current sequence above the no-change level was extended to 16 months.

Germany was the only other nation to signal improved overall manufacturing performance in October. Of the remaining big-three nations, the downturn in France accelerated and Italy fell back into contraction. The rate of deterioration in Greece eased, while Austria fell further from the rest of the pack as its PMI sank to a two-year low.

The level of new orders at eurozone manufacturers declined for the second successive month in October, albeit to a slightly less marked degree than in the previous month. New orders fell in Germany, France, Italy, Austria and Greece, in contrast to the strong gains registered in Spain, the Netherlands and Ireland.

The weakness in overall new business inflows was mainly centred on domestic markets as new export orders posted a modest gain. The news from the external demand front was less than positive, however, as the latest increase was the slowest during the current 16-month sequence of growth.

France and Austria both reported contractions in new export business. The remaining nations covered by the survey all reported increases, with solid growth in Spain, the Netherlands and Ireland, and comparatively modest expansions in Germany, Italy and Greece.

Payroll numbers in Germany and Ireland rose at the sharpest rates since January 2012 and May 2014 respectively. Slight gains were also signalled for Spain and the Netherlands. Job cuts were reported by France, Italy, Austria and Greece. ■