Staff writer ▼ | July 9, 2013
Nearly half (45%) of Europeans households would upgrade their internet subscription or switch supplier for a higher speed broadband, according to the EU-wide survey of how Europeans use the internet. 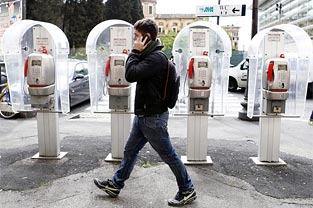 Nearly half (45%) of Europeans households would upgrade their internet subscription or switch supplier for a higher speed broadband, according to the EU-wide survey of how Europeans use the internet.


"Consumers increasingly care about their internet being fast enough to watch videos, for example. And for those who run businesses from their home, speed is also a competitiveness issue. Consumers now focus on both speed and price when making their choices," said European Commission Vice President Neelie Kroes.

The survey also found that 54% of households limit their national and international mobile phone calls because of concerns about cost. However, the 2013 survey saw an 11% drop (from 60% to 49%) in the numbers concerned about the cost of calls to networks other than their own domestic networks. This is a clear sign that the Commission's efforts to reduce mobile termination rates are having a positive effect for consumers.

Competition has effectively delivered affordable prices, while more attention will be needed to ensure demands for higher speeds are met. Around 40% of users have found it difficult to access online content and applications because of insufficient speed or download capacity.

Of those surveyes, 20% said they sometimes found it difficult to access online content or had apps blocked on mobile phones (up 4 pp on December 2011). This was more likely to occur when trying to watch videos (42%), listen to music (22%), download video content for free (22%), watch live events (20%) or play online games (19%).

Sound quality was a concern. Only 38% users agreed that sound quality is very good on their mobile phones compared with 49% for landline phones and 25% for Internet calls.

Video blocks are the most annoying net neutrality and copyright issue while 34% of adults use VOIP calling services. ■

Discovery Air adds Michael Grasty to the board