Staff writer ▼ | November 10, 2014
Economic growth in Colombia will probably slow to around 4.3 percent in 2015 from 5 percent this year, hurt by lower oil prices and a drop in exports, central bank chief Jose Dario Uribe said. 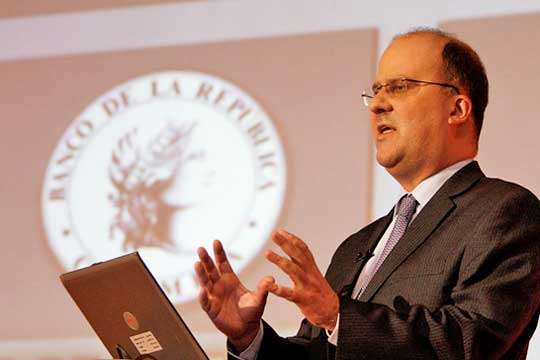 In 2015   Slightly lower growth next year
The bank sees expansion in the second half of this year of about 4.6 percent, Uribe said in his quarterly presentation.

"It's a slowdown, but remains important growth. Indeed 4.6 percent is the fastest growth among bigger economies in the region and a great majority of countries worldwide."

A strengthening of the economy of the United States, Colombia's biggest trade partner, will be positive for Colombia in the coming quarters and help maintain stable growth, said Uribe, one of seven board members who decide on monetary policy.

The central bank maintained its growth forecast of 5 percent for this year, though it said it could come in slightly below that. The bank expects inflation this year and next to be about 3 percent, the midpoint of its 2 percent to 4 percent target range. ■