China to have most robots in the world by 2017

Staff writer ▼ | February 7, 2015
China will have more robots operating in its production plants by 2017 than any other country as it cranks up automation of its car and electronics factories, the International Federation of Robotics (IFR) said. 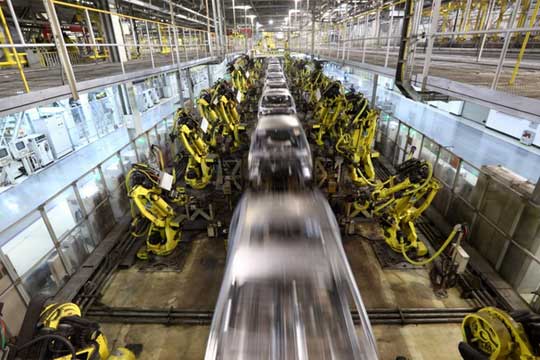 Technology   The International Federation of Robotics
Already the biggest market in the $9.5 billion global robot trade, or $29 billion including associated software, peripherals and systems engineering, China lags far behind its more industrialised peers in terms of robot density.

But a race by carmakers to build plants in China along with wage inflation that has eroded the competitiveness of Chinese labour will push the operational stock of industrial robots to more than double to 428,000 by 2017, the IFR estimates.

Japanese robot makers still have the lion's share of the market, with about 60 percent, but Chinese suppliers are growing fast, with about a quarter of the market. Most of the rest are supplied by European and US manufacturers.

The automotive industry is by far the largest customer for robots in China, accounting for about 40 percent of robots in operation, as China is both the world's biggest car market and its biggest production site.

European carmakers such as Volkswagen and Daimler which have invested heavily in China are bringing their robotics suppliers with them, Litzenberger said. ■

Jamaica sees opportunity in end of U.S. embargo on Cuba