Staff writer ▼ | December 16, 2013
By 2017, all of that year's end-of-life refrigerators, TVs, mobile phones, computers, monitors, e-toys and other products with a battery or electrical cord worldwide could fill a line of 40-ton trucks end-to-end on a highway straddling three quarters of the Equator. 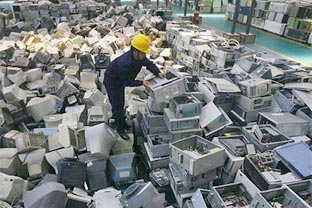 By 2017, all of that year's end-of-life refrigerators, TVs, mobile phones, computers, monitors, e-toys and other products with a battery or electrical cord worldwide could fill a line of 40-ton trucks end-to-end on a highway straddling three quarters of the Equator.


That startling forecast, based on data compiled by "Solving the E-Waste Problem (StEP) Initiative",a partnership of UN organizations, industry, governments, non-government and science organizations, represents a global jump of 33% in just five years.

While most of these used e-products are destined for disposal, gradually improving efforts in some regions are diverting some of it to recycling and reuse. The escalating global e-waste problem is graphically portrayed in a first-of-its-kind StEP E-Waste World Map. The map was launched coincident with a complementary new StEP report characterizing US domestic and transboundary flows of used electronics no longer residing in households, detailed below.

The interactive map resource, presenting comparable annual data from 184 countries, shows the estimated amount of electrical and electronic equipment (EEE - anything with a battery or a cord) put on the market and how much resulting e-waste is eventually generated (i.e. comes out of use or post-use storage destined for collection by a recycling company or disposal).

By providing a better sense of e-waste quantities to anticipate, the initiative is expected to The map shows, for example, that almost 48.9 million metric tons of used electrical and electronic products was produced last year - an average of 7 kg for each of the world's 7 billion people. And the flood of e-waste is growing. Based on current trends, StEP experts predict that, by 2017, the total annual volume will be 33 per cent higher at 65.4 million tons, the weight equivalent of almost 200 Empire State Buildings or 11 Great Pyramids of Giza.

The StEP e-waste world map database shows that in 2012 China and the United States topped the world's totals in market volume of EEE and e-waste. China put the highest volume of EEE on the market in 2012 - 11.1 million tons, followed by the US at 10 million tons. Those positions were reversed when it came to the total volume of e-waste generated per year, there being more products put on the market in the past in the US which are now likely to be retired.

Here the US had the world's highest figure of 9.4 million tons and China generated the second highest e-waste total of 7.3 million tons. However, the world's two biggest economies were far apart when it came to the amount of annually e-waste per person. Here the US was highest among major countries (and seventh overall) with each American responsible for an average 29.8 kg of hi-tech trash. That was almost six times higher than China's per capita figure of 5.4 kg. ■