Staff writer ▼ | December 5, 2013
Potential polluters should be prepared for a worst-case scenario and face unlimited liability in the case of an oil spill from one of their tanker ships, a Canadian government-appointed panel recommends. 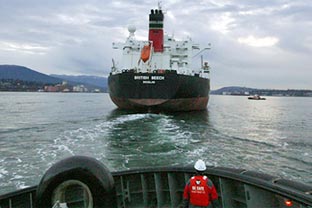 Potential polluters should be prepared for a worst-case scenario and face unlimited liability in the case of an oil spill from one of their tanker ships, a Canadian government-appointed panel recommends.


The three-member panel of experts has delivered a report with 45 recommendations for improving Canada's preparedness for oil spills from tankers and barges. This is the first major review of Canada's ship-source oil-spill regime since it was implemented in the mid-1990s. The 66-page report notes that two current pipeline proposals alone—by Enbridge and Kinder Morgan—could bring another 600 tankers through British Columbia waters, while posing new hazards by transporting diluted bitumen and liquefied natural gas.

"The very appointment of this panel demonstrates our commitment to protect Canadians and our environment. The panel's independence and its investigation and the extent of its work shows that we are serious about obtaining clear advice in a timely manner," Transport Minister Lisa Raitt said.

Ms. Raitt listed a series of actions she said the government has already taken to improve tanker safety, including a promise to increase inspections of foreign tankers and a study on the behaviour of diluted bitumen in sea water. She added that the goal of the panel's report is to improve on "an already robust tanker safety system."

The study recommends removing the current $161-million liability limit for each spill in favour of an unlimited liability for polluters.

"We feel that potential polluters should be prepared, through their contracted Response Organizations, to respond to a worst-case discharge, whether it be the full cargo of a tanker or a complete release of bunker fuel on board a vessel," it says.

Its executive summary makes the point even more clearly: "Canadian taxpayers should not bear any liability for spills in Canadian waters." The report recommends annual spill training exercises, and regional risk assessments based on local geography and it calls for faster emergency responses to spills.

"In our view, the current response time planning standards will not ensure the best possible outcomes in some spill scenarios." ■