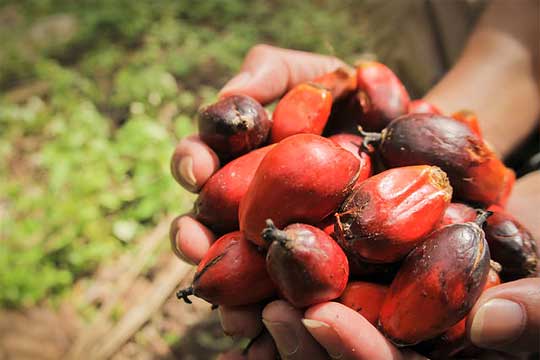 Frost & Sullivan   45% of the global vegetable oil market will be palm oil
In the last decade, palm oil consumption for Biofuel has increased considerably. Global palm oil production is expected to grow at a CAGR (Compound Annual Growth Rate) of 5.9% in the period 2011 to 2020 to reach 84.0 million MT; majority of the growth is expected to come from Indonesia with a CAGR of 7.8 percent, and production in Malaysia is expected to expand only by 2.7 percent.

He also said that palm oil pricing is a complex matter that is influenced at any given time by one or a multitude of factors can than cause significant volatility at times.

Chris de Lavigne said that weather being so critical to the growth of palm also has a large impact on it. He said weather is one of the key factors in the supply equation of oilseeds and palm oil. It is also an important catalyst to price movement, and may be a key catalyst to palm oil prices in 2015.

He also said that Malaysia and Indonesia are at slightly different developmental phases and also have some different policy agendas and objectives. "Indonesia is on a fast track to catch up in the refining and downstream sector and their policies reflect this objective," he added.

He said that the Indonesian palm oil industry faces many challenges such as infrastructure, rising labour and diesel costs, additional downstream capacity, as well as trade spats and environmental concerns amongst others.

Fatty Oleochemical industry has undergone numerous fundamental changes over the last 30 years, which have only exacerbated over the last 5 years making it volatile. The industry is faced with numerous opportunities, challenges and question marks that will define it over the next 10 years.

Chris de Lavigne said that most players currently in the market are currently expanding production with at least 2-3 new players expected to enter the market shortly, spurred on by CPO (Crude Palm Oil) tax incentives that were introduced a few years back.

He also said that the raw material prices are high at the moment due to ample supplies of vegetable oils, slowing growth, and lack of biodiesel support. "Raw material availability is not the issue. Plenty of supply of crude palm oil and palm oil kernel moving forward, but there is likely to be more competition to control it," he added.

Chris de Lavigne noted that CAGR for crude palm oil and palm oil kernel stands at around 8-10 percent per annum, and is likely to continue at this rate through to 2020. "Overall, the markets have grown pretty much in line with GDP, cost and technology will be key as will looking into the future," he added.

In 2012, global biodiesel production is estimated at 22.9 million tonnes and grew to 26.3 million tonnes in 2013 and almost 30 million in 2014. "Asia thus needs to open up and develop its own domestic market. A strong domestic market always supports potential exports too," de Lavigne said.

Indonesia is looking to support its industry through subsidies but at the same time is raising tax from shipping palm and derivatives to compensate for this. Whether this is attractive to the industry remains to be seen.

Chris de Lavigne said that the advent of biodiesel has clearly pushed the palm oil market into a different trading range.

"For the most part in the last 7 years we can see that palm oil has traded at a premium to Brent crude oil making biodiesel difficult without some form of support 'artificial' or real," he added.

Overall, unless that there are price catalysts such as biodiesel and weather the industry will likely remain in a fairly bearish mode and this could last some time. As such Chris de Lavigne noted that "the industry needs to reduce costs as well as look at how it can better utilize its assets and selectively develop more downstream revenues." ■