Staff writer ▼ | December 29, 2014
Among the countries with the highest wind power, Brazil is the one with the higher capacity factor, pointing harnessing the wind to generate power (the relationship between GWh generated and the installed capacity over one year). 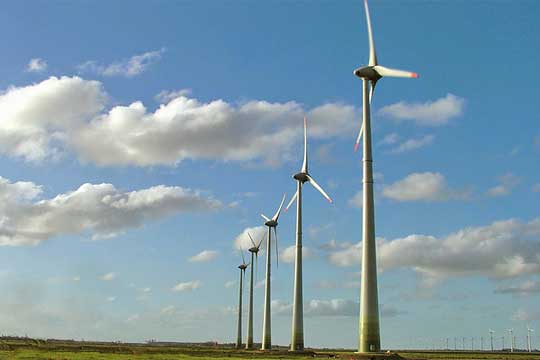 The capacity factor (CF) of wind power generating enterprises in Brazil reaches 36% and exceeds by 53% the average international data. Turkey, U.S. and Australia have CF appear between 33% and 32%. According to the study, technological advances in materials and size of the facilities have allowed the increase of the capacity factor with better use of winds.

Worldwide, the share of wind power in the global energy matrix has already reached 2.7% in 2013. In the global wind power, the United States had the highest proportion of 27%, followed by China with 21%. Brazil is the 15th country in wind power generation, and accounts for 1% of the world wind.

Denmark has the highest proportion of wind power in the total generation in the country, 32.5%. In Portugal the proportion is 23.3%; in Germany 19% and Ireland, 17.7%. In other countries, the ratio is below 9%.

In Brazil, by state, Ceará has the highest proportion in the Brazilian wind power, with 34%, followed by Rio Grande do Norte and Rio Grande do Sul, with almost 20% share each. In terms of capacity factor, considering the size of the park by UF, Bahia presents the most meaningful indicator of 40.1%. ■

More than $16.5 million for affordable housing in New York State