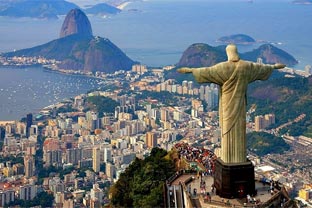 Brazil's economic output grew 2.3% in 2013 for a third straight year of modest expansion, the government announced.


GDP for the final quarter of the year rose a 0.7% compared to the third quarter, according to Brazil's Institute for Geography and Statistics, IBGE.

Among the sectors showing the greatest expansion was agriculture, which rose by seven percent. By contrast, the service sector expanded by two percent and industrial output was up 1.3 percent.

To stimulate the economy, the government since 2011 has cut taxes on cars and home appliances among other measures.

The institute’s GDP figure was nearly in line with forecasts by economists, who had predicted earlier this year that the economy grew by between 2.28% and 2.3% in 2013. The government for President Dilma Rousseff has watered down expectations surrounding Brazil's economic performance in 2014, saying last week it is projecting 2.5% growth, down from an earlier forecast of 4 percent expansion. ■